Sir Robert William "Bobby" Robson CBE (18 February 1933 – 31 July 2009) was an English association footballer and manager. He played almost 600 matches and scored over 100 goals. He also played for the England national team. He scored four goals in 20 games for them.

Robson was diagnosed with lung cancer. It was described as terminal in 2007. He died in 2009.

Robson was born in Sacriston, County Durham, England in 1933. He was the fourth of five brothers. As a young child he often went to St James' Park with his father to watch Newcastle United F.C.

When he was only 15, Robson played football in a local team of boys aged 18. He became an apprentice electrician but still played football. In 1950, the Fulham F.C. manager, Bill Dodgin, Sr., visited Robson's home. He offered Robson a contract to play professional football. Robson signed the contract and moved to London.

Robson played in his first professional football game for Fulham F.C. in 1950. He spent six years at the club before moving to West Bromwich Albion for £25,000. He played for Albion for six years. During that time, he played in nearly 250 games, scoring over 50 goals. Albion said no when Robson asked for a bigger salary, and he moved back to Fulham. Fulham sold some important players after Robson came back to the team. This led Robson to think he would not win any trophies. He left Fulham in 1967 and joined the Vancouver Royals in Canada as both a player and a manager. However, he had to share the management role with someone else. Robson did not like this and moved back to England in 1968. He started to manage Fulham. 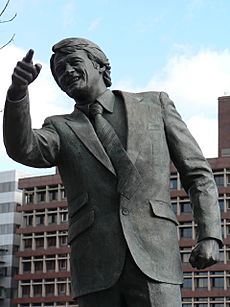 Statue of Robson at Portman Road

Robson started his career as a manager at Fulham F.C. The team were relegated in his first season there. Robson was sacked the following season. In 1969 he became manager of Ipswich Town F.C. However he won no major competitions or trophies during his first four years in charge. In 1973 Ipswich won the Texaco Cup.

Over the next nine seasons in the First Division, only once did Ispwich finish lower than the sixth place . This was the 1977–78 season however the club then went on to win the FA Cup, beating Arsenal F.C. 1–0 at Wembley. Three years later, Robson led Ipswich to victory in the UEFA Cup. The club beat Dutch team AZ Alkmaar 5–4 over two games. Robson moved on to manage the England national football team in 1982.

Robson managed the England team 95 times, with 47 victories. In the 1986 FIFA World Cup in Mexico, he led the team to the quarter-finals where they lost to Argentina 2–1. Both Argentina goals were scored by Diego Maradona, including the famous "Hand of God" goal. Four years later, in the 1990 FIFA World Cup, Robson led England into the semi-finals. This time they lost to West Germany in a penalty shoot-out. After this World Cup, Robson's contract was not extended by the Football Association.

Robson joined Dutch club P.S.V. Eindhoven in 1990. They won the league in his first two seasons. However, they did not win any European competitions and in 1992 Robson lost his job. Robson joined Portuguese club Sporting Clube de Portugal in July 1992. He led them to third place in the league in his first season. Defeat in Europe meant Robson lost his job again, in December 1994. He was quickly offered the manager's job by F.C. Porto. He led the team to victory in the Portuguese Cup and they won the league for two seasons in a row.

In the summer of 1996, Robson became manager at FC Barcelona. In his short time at the club, he signed Ronaldo and led the club to win the Spanish Cup, Spanish Super Cup and European Cup Winners' Cup. The next season Robson took a more administrative position before going back to Holland to manage P.S.V. Eindhoven for one season.

The next year, Robson went back to England to work for the Football Association. Soon after his return, Newcastle United F.C. manager Ruud Gullit left, and Robson took the manager's job at St James' Park. He managed the club until 2004 without winning any major trophies or competitions.

On 13 January 2006, Steve Staunton was selected as manager of the Republic of Ireland national team. Robson was named in a support role as "International Football Consultant". Because of health problems, Robson left this position on 17 November 2007.

Robson was married to his wife Elsie from 1955 until his death. They had three sons: Andrew, Paul and Mark.

In 1991, Robson was diagnosed with colorectal cancer, from which he recovered the following year. His ill health affected his work. While at Porto, for example, Robson suffered from malignant melanoma. This meant he missed the first months of the 1995–96 season. He had many operations, including one in 2006 for a brain tumour. On 17 October 2006, Robson was given the all-clear. He was set to complete his contract as consultant to the Irish team. In May 2007, he was diagnosed with lung cancer. He died of lung cancer on 31 July 2009.

Robson was in some advertisements, including Carlsberg's "Best Pub Side" television advertisement. He also worked on ITV during the 2002 World Cup and the 2004 European Championship. He also wrote a weekly column for The Mail on Sunday.

Bobby Robson was given several honours for his work in football. In 1990, after his eight years as England manager, he was awarded a CBE. In 2002, he was knighted. Both awards were for services to football. That year he was awarded the freedom of Newcastle upon Tyne. He also received the UEFA President's Award for 'services to football'. He was inducted into the English Football Hall of Fame in 2003. In 2005, Robson was made an Honorary Freeman of Newcastle. Robson said, in his autobiography, it was "the proudest moment of my life".

Robson also won the 1992 Football Writers' Association Tribute Award for an "outstanding contribution to the national game". In 2001 he was awarded the British Sports Writers' Association Pat Besford Trophy for Outstanding Achievement. In 2005, he received a lifetime achievement award from the Sports Coach UK Awards. He also received the Eircom International Personality of the Year in 2006. On 9 December 2007, Robson received the BBC Sports Personality of the Year Lifetime Achievement Award.

In May 2008 was the 30th anniversary celebrations of Ipswich Town's 1978 FA Cup win. During this, Robson was granted the Freedom of Ipswich by the Lady Mayor. On 8 December 2008, he was given the Freedom of the City of Durham.

All content from Kiddle encyclopedia articles (including the article images and facts) can be freely used under Attribution-ShareAlike license, unless stated otherwise. Cite this article:
Bobby Robson Facts for Kids. Kiddle Encyclopedia.