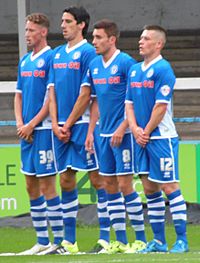 Rochdale A.F.C. is an English Soccer club who play in League Two of the English Football League. The club was founded in the town which bears their name, in 1907, and has played at the Spotland Stadium throughout its history. They have played in the bottom tier of the Football League since 1974, which is longer than any other club has spent there. They reached the fifth round of the FA Cup for the first time in 1989 and again in 2002 which is as far as they have ever gone in a major competition

All content from Kiddle encyclopedia articles (including the article images and facts) can be freely used under Attribution-ShareAlike license, unless stated otherwise. Cite this article:
Rochdale A.F.C. Facts for Kids. Kiddle Encyclopedia.