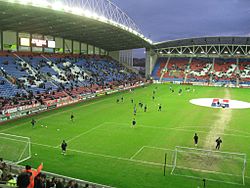 DW Stadium in 2006, when it was called JJB Stadium

The DW Stadium is a football stadium in Wigan, Greater Manchester, England. It is the current home stadium of Wigan Athletic football club and the Wigan Warriors rugby league club. The stadium is named after the sportswear and fitness company DWSportsfitness.

It opened in 1999 as JJB Stadium, from the JJB Sports sportswear company. The name changed in 2009 when Wigan Athletic owner Dave Whelan bought a chain of fitness clubs from JJB Sports and set up a new business, DWSportsfitness. The deal also gave Whelan stadium naming rights, and he changed its name to DW Stadium at that time.

All content from Kiddle encyclopedia articles (including the article images and facts) can be freely used under Attribution-ShareAlike license, unless stated otherwise. Cite this article:
DW Stadium Facts for Kids. Kiddle Encyclopedia.