Klose is a great player known for his heading skills and he is currently the all-time top scorer of the Germany national football team with 71 goals. He is also the all-time leading goal scorer of the FIFA World Cup after beating Ronaldo's record in the semi-final against Brazil. 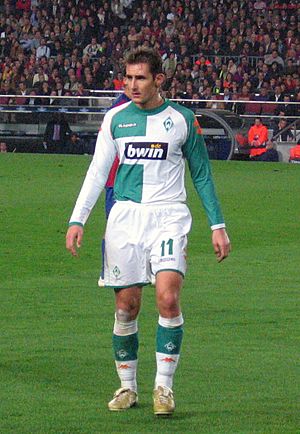 All content from Kiddle encyclopedia articles (including the article images and facts) can be freely used under Attribution-ShareAlike license, unless stated otherwise. Cite this article:
Miroslav Klose Facts for Kids. Kiddle Encyclopedia.