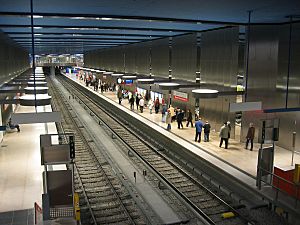 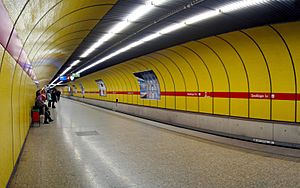 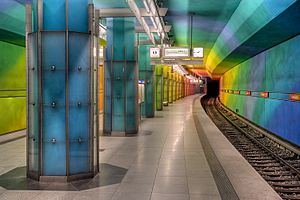 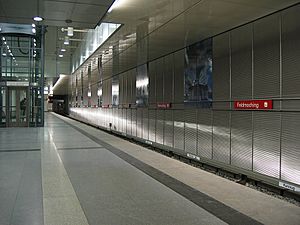 The Munich U-Bahn is an underground railway network in the city of Munich, Germany. It is run by the Münchner Verkehrsgesellschaft, or MVG for short. It has 6 lines and has a network of 103,1 km (64,1 miles) and has exactly 100 stations. Only one line, the U6 crosses the city border in Garching.

There are currently 7 lines:

The trains can go 80 km/h, which is the fastest in Germany. Only the lines U5 and U6 are partly above ground. The U5 comes over ground only at the last station, the U6 for the last six stations in the north.

There are 3 "line families". They share the tunnel in the city centre. Each family has a colour. It is used in the stations.

Almost every station has a platform in the middle. Only the stations Olympia-Einkaufszentrum (U1), Richard-Strauss-Straße (U4), Neuperlach Süd (U5), Garching-Hochbrück and Nordfriedhof (both U6) have platforms on the side.

At the stations Innsbrucker Ring (U2/U5) and Scheidplatz (U2/U3) there are four tracks with two platforms. To change trains you only have to go to the other side of the platforms. Two lines cross at these stations. The stations Hauptbahnhof (Central Station) (U1/U2) and Münchner Freiheit (U3/U6) have four tracks. At the Hauptbahnhof there are two more tracks on another level for the U4 and U5. Here two lines separate. The stations Kolumbusplatz (U1/U2), Implerstraße (U3/U6) and Max-Weber-Platz (U4/U5) have three platforms. Two for trains to the city and one for trains from the city. Two lines separate at these stations.

In 1980 the U1 started running with the U8 (now the U2). After the branch to Rotkreuzplatz was opened, it became a single line.

Today the U1 is 12.2 km long. It runs between Olympia-Einkaufszentrum and Wettersteinplatz. It shares track with U2 between Hauptbahnhof (Central Station) and Kolumbusplatz.

In 1980 it started together with the U1. First it was called U8. Today it is 24.4 km long. It runs between Feldmoching and Messestadt Ost. It shares track with U1 between Hauptbahnhof (Central Station) and Kolumbusplatz.

In 1972 this line was opened, because of the Olympic Games.

The line is 21.0 km long. It runs between Moosach and Fürstenried West. It shares track with the U6 between Münchner Freiheit and Implerstraße.

The U4 was named U9 at first. It opened together with the U5. The line is the shortest in the network. It is 9.3 km long and has only 13 stations. It runs between Arabellapark to Westendstraße. Between Max-Weber-Platz and Westendstraße. In the evenings, it only operates between Lehel and Arabellapark.

The U5 was opened together with the U4. The line is 15.4 km long. It runs between Laimer Platz and Neuperlach Süd.

U6 is the oldest and longest line. The first bit was built in 1938, but it was opened in 1971. It is 27.4 km long. It operates between Garching-Forschungszentrum and Klinikum Großhadern.

The line was opened in 2011. It runs beetween Westfriedhof and Neuperlach Zentrum only in rush hour.

The Munich U-Bahn uses three different kinds of trains. Altogether there are 550 trains, which can be used on any line. 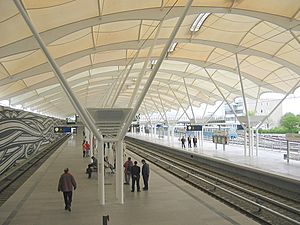 Because of the new Allianz Arena (soccer stadium) the nearby U-Bahn station needed to be upgraded. A new, second platform was built and the old platform was moved north by about 100 m. All together the new station has four tracks. Start of construction: 10 October 2002, opened: 4 May 2005 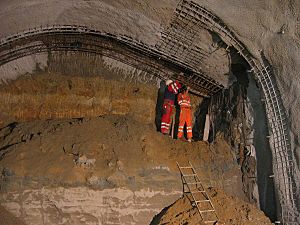 Because of more passengers and the new Allianz Arena also this station was extended. New pedestrian tunnels were built and the platforms widened. Start: 27 May 2003, opened: 29 May 2006

This extension through the town of Garching connects Campus Garching of Munich University of Technology and other research institutes to Munich's subway system. Start: 2 April 2001, opened: 14 October, 2006

This extension goes past the Olympiapark and the Oberwiesenfeld on to the Olympia-Einkaufszentrum, where also the U1 ends. opened: 28 October 2007

All content from Kiddle encyclopedia articles (including the article images and facts) can be freely used under Attribution-ShareAlike license, unless stated otherwise. Cite this article:
Munich U-Bahn Facts for Kids. Kiddle Encyclopedia.