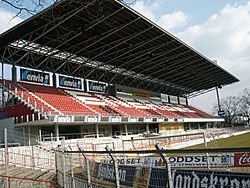 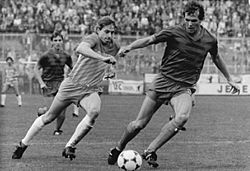 FC Energie Cottbus is a German football club from Cottbus. They are also known as ´´Energie`` or ´´Die Lausitzer``.

Thery have been switching between the Bundesliga and the 2. Bundesliga (second division) several times. Currently, they play in the 2nd division as they got relegated by 1.FC Nuremberg.

Energie Cottbus was founded in 1966 but the team had a lot of other names. The history goes back to 1919 where the club was originally founded by coal miners as FSV Glückauf Brieske-Senftenberg. From 1924 to 1933 the club was called SV Sturm Grube Marga. In 1933 the club was banned by the Naziparty.

After the German reunification Energie Cottbus was one of the few teams which played successfully in the German professional football.

All content from Kiddle encyclopedia articles (including the article images and facts) can be freely used under Attribution-ShareAlike license, unless stated otherwise. Cite this article:
FC Energie Cottbus Facts for Kids. Kiddle Encyclopedia.