Bella Vista is a city in Benton County, Arkansas. First established in 1965 as a summer resort town, the community evolved into a retirement community, and continues to change following incorporation in 2006. The city's struggle with incorporation began in 1977 and periodically returned as the community grew rapidly. Following the change, municipal government replaced the Property Owners Association as primary government; entering a new era for Bella Vista. The community is located on the Springfield Plateau of the Ozark Mountains. Valleys, creeks, and steep rises characterize the city's topography. Bella Vista is located north of Bentonville and Rogers and is the northernmost city in the Northwest Arkansas metropolitan statistical area. The city has been experiencing a population and building boom in recent years, as indicated by a 60% growth in population between the 2000 and 2010 censuses.

The rapid growth of the Northwest Arkansas area, including Bella Vista, has expedited the need for a fully controlled access highway in the area. Bella Vista is the northern terminus of Interstate 49 (I-49) in Arkansas. The Bella Vista Bypass, currently a two-lane freeway that is ultimately planned to route I-49 to the south and west of Bella Vista, is under construction.

There were 7,818 households out of which 13.5% had children under the age of 18 living with them, 72.4% are married couples living together, 3.2% had a female householder with no husband present, and 23.2% were non-families. 20.5% of all households were made up of individuals and 13.3% had someone living alone who was 65 years of age or older. The average household size was 2.10 and the average family size was 2.38. 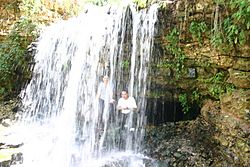 Bella Vista has seven lakes. These lakes are not "public" in that only members of the community or their guests are permitted to use them. Lake Ann, Lake Windsor, and Lake Loch Lomond are the largest all-sports lakes in the town. Lake Avalon, Lake Norwood, and Lake Rayburn are primarily fishing lakes with "no wake" restrictions. Current POA boat permits are required as are Arkansas fishing licenses, when fishing Bella Vista lakes. 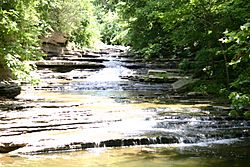 Bella Vista Lake has a 1.8-mile-long (2.9 km) walking/biking trail that goes around the lake. (The trail, however, is actually maintained by the city of Bentonville.) Tanyard Creek is the site of another walking trail off Lake Windsor in the center of the village. It has a footbridge and some waterfalls except during dry times.

All content from Kiddle encyclopedia articles (including the article images and facts) can be freely used under Attribution-ShareAlike license, unless stated otherwise. Cite this article:
Bella Vista, Arkansas Facts for Kids. Kiddle Encyclopedia.