Gentry is a city in Benton County, Arkansas, United States. The population was 3,158 at the 2010 census. The city was founded in the Ozark Mountains in 1894 along what would become the Kansas City Southern Railroad. The city's prior prosperity in the orchard industry, especially apples, was further strengthened by the rail connection. Following the decline of the apple industry in the 1930s, Gentry shifted its economy towards poultry along with many other areas of northwest Arkansas. Today, Gentry is located within the Fayetteville-Springdale-Rogers Metropolitan Area. Gentry is known for the Wild Wilderness Drive-Through Safari, located 2 miles (3 km) north of the city limits. 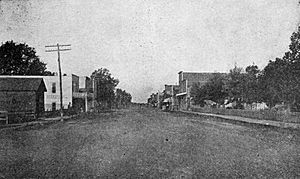 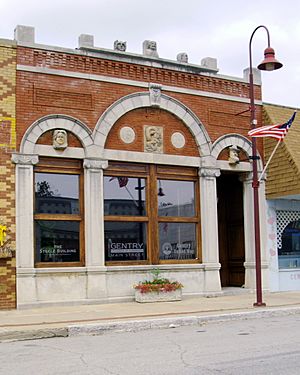 The historic Bank of Gentry building was built in 1904 and added to the National Register of Historic Places (NRHP) in 1988.

Gentry began as a rural Ozark agricultural community named Orchard City. Located in western Benton County, it was known for its apple orchards and other produce. The town began to grow when the Kansas City Southern Railroad was constructed through the town. In 1894, residents of the community petitioned the county to officially incorporate, and the city's name was changed to Gentry, after an official in charge of the construction of the railroad.

The railroad proved important to Gentry, and by 1903 the town had grown to a population of 1,000.

The railroad company built a new depot in Gentry in 1926-1927. It was known as one of the nicest depots on the railway line. A banquet was held for the grand opening, and railway officials arrived on a special train to commemorate the event. Four to six passenger trains a week came through Gentry until passenger service was discontinued in 1964.

In 1937, Highway 59 was built, running through the city north and south. It remains the main highway through the city, linking Gentry with other west Benton County communities.

In 1946, the City Council voted to buy a water tank for $1,650 from the War Assets Corporation in Kentucky. In 1948, the city held a special election to issue bonds to install larger water mains and additional fireplugs. In the 1950s, the city purchased its own water company. At the beginning of the 21st century, Gentry was expanding water lines into rural areas surrounding the community.

Using donations, local businesses built the first auditorium at the intersection of Main and Collins streets. The building now houses the city's police department and courtroom.

In the 1960s, when agriculture was no longer the economic base it had once been for the city and the railroad, the train depot was torn down.

The next decade saw the beginning of the construction of a power plant by Southwestern Electric Power Company (often known as SWEPCO). The plant, located 1 mile (1.6 km) west of the city limits, is a coal-fueled electric generating facility called Flint Creek Power Plant. Today SWEPCO continues to provide electrical power, and SWEPCO Lake (shown on maps as "Lake Flint Creek" but known by locals as "hot lake") is used for fishing and recreation. To ease traffic through downtown, a new Arkansas Highway 12 bypass was built on the southern edge of town. In the early 1970s, the Wild Wilderness Drive-Through Safari was established north of town. The 400-acre (160 ha) park is home to a variety of exotic animals and consists of a 4 miles (6 km) drive-through, petting parks and walk-through areas for interaction with the animals. In 1983, the McKee Foods Corporation (then known as McKee Baking Company) opened its manufacturing facility in Gentry. 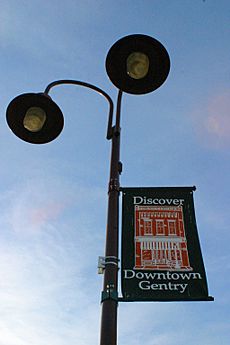 There were 842 households out of which 35.6% had children under the age of 18 living with them, 54.6% were married couples living together, 13.8% had a female householder with no husband present, and 27.9% were non-families. 25.3% of all households were made up of individuals and 13.2% had someone living alone who was 65 years of age or older. The average household size was 2.57 and the average family size was 3.06.

Gentry has an active faith community with churches of many different affiliations, including Seventh-day Adventist, United Methodist, Baptist, Church of Christ, Assemblies of God, Rastafarian and Mennonite. Most denominations offer programs for youth and families as well as regular worship services. A community-wide Thanksgiving program is hosted each year by one of the local churches.

All content from Kiddle encyclopedia articles (including the article images and facts) can be freely used under Attribution-ShareAlike license, unless stated otherwise. Cite this article:
Gentry, Arkansas Facts for Kids. Kiddle Encyclopedia.