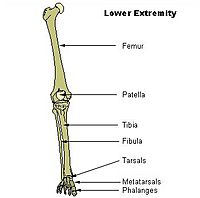 The fibula is one of the two bones which make up the lower leg (humans), or back leg in tetrapods. The other one is the tibia. Above them is the knee and femur; below are the feet. Muscles are attached to the top of the fibula which help move the knee. It is also used to support the knee and the tibia.

All content from Kiddle encyclopedia articles (including the article images and facts) can be freely used under Attribution-ShareAlike license, unless stated otherwise. Cite this article:
Fibula Facts for Kids. Kiddle Encyclopedia.