In 1823, Bishop John Milner, Vicar Apostolic of the Midland District, sent a Fr William Foley to Northampton to establish a permanent Roman Catholic presence in the town. His first base was a small house, used by a Catholic priest during the previous two years, which had one room as a chapel. Fr Foley bought a piece of land on the site of the original St Andrew's Priory, Northampton, whence Thomas Becket had gone into exile. It was there that Foley decided to have a purpose-built chapel constructed; the chapel, dedicated to Saint Andrew, was opened on 25 October 1825.

The origins of the current building date back to 1840 when the first Bishop of Northampton, William Wareing, commissioned Augustus Welby Northmore Pugin to design a collegiate chapel of St Felix. The chapel of St. Andrew was too small for the larger congregation. The new chapel was built in 1844. The number of worshippers soon outgrew the size of the building and Pugin's son Edward Welby Pugin was chosen by Bishop Wareing's successor, Francis Amherst to design an extension in order to make the building into a cathedral. This extension came in the form of the current nave which was opened in 1864, dedicated to Our Lady Immaculate and St Thomas of Canterbury. Dating from the 1860s, the stained glass windows were made by John Hardman of Birmingham. Richly coloured, they depict St Peter and other local saints, such as St Edward the Confessor and St Thomas Becket. 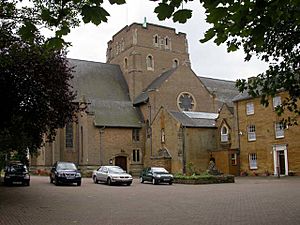 West side extension of the cathedral

The cathedral was left in this form until 1948 when it was decided by Bishop Leo Parker that the west end of the cathedral should be extended. This meant that part of St Andrew's chapel had to be demolished in order for the development to go ahead. The part of the chapel that survived, including the original altar, is now in the sacristy and chapter room of the cathedral. The building work was finally completed, seven years later in 1955. Albert Herbert was the architect and he oversaw the original west end being replaced by a straight west end as well as the transepts and a crossing tower being built. Bishop Leo Parker died in 1975 and he was buried in Blessed Sacrament Chapel.

In 1998, the sanctuary was re-ordered. A new window, designed by Joseph Nuttgens (a student of Karl Parsons and who has a work installed in Windsor Castle), was put into the Blessed Sacrament Chapel, the original choir stalls from the main altar were moved into the chapter room and the cathedra (or bishop's throne) was replaced with one carved by Stephen Foster; designed to accompany the Triptych of the Holy Spirit behind it.

The cathedral has two organs. One is a historical tracker action pipe organ, the other is a digital instrument. The tracker action organ was built in 1976 by Hendrik ten Bruggencate and was inspired by the Swiss firm Metzler Orgelbau.

The other, a digital custom made Viscount organ was installed in May 2008. The console is sited in the west gallery.

The cathedral also has a regular choir, that sings in the 10:30 Sunday Mass and other major Cathedral liturgies.

The cathedral also operates as a parish church and hosts various voluntary parish organisations. In particular the local Society of Saint Vincent de Paul meet there to organise serving the poor and disadvantaged of the local area.

All content from Kiddle encyclopedia articles (including the article images and facts) can be freely used under Attribution-ShareAlike license, unless stated otherwise. Cite this article:
Northampton Cathedral Facts for Kids. Kiddle Encyclopedia.