Elton Hall is a baronial hall in Elton, Cambridgeshire. It has been the ancestral home of the Proby family (sometime known as the Earls of Carysfort) since 1660.

Elton Hall is 2 miles (3.2 km) from Fotheringhay Castle, where Mary, Queen of Scots was executed in 1587.

The Victorian gardens have been skilfully restored in recent years and contain a knot garden, a new rose and herbaceous garden, fine hedges and a Gothic orangery built to celebrate the Millennium. The gardens are promoted by the Campaign to Protect Rural England. 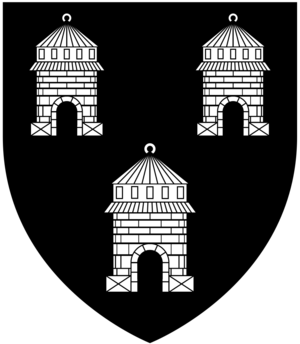 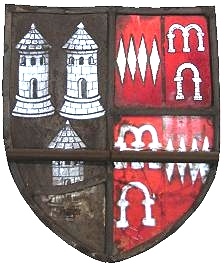 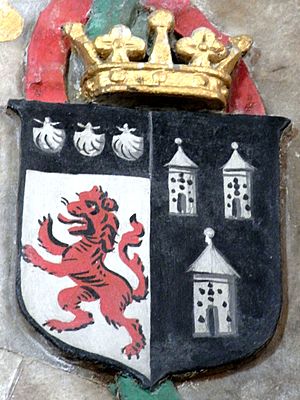 In 1526 John Russell, 1st Earl of Bedford (c.1485-1555), KG, married Anne Sapcote, daughter of Sir Guy Sapcote of Huntingdonshire by his wife Margaret Wolston and widow successively of John Broughton (d. 24 January 1518) of Toddington, Bedfordshire, by whom she had a son and three daughters, and secondly of Sir Richard Jerningham (d.1525), by whom she had no issue. By Anne Sapcote he was the father of Francis Russell, 2nd Earl of Bedford (1527–1585).

Robert Sapcote (d. Jan.1600/1), was probably the last of his family to live at Elton. His ledger stone formerly in the chapel of Elton Hall survives in Elton Church 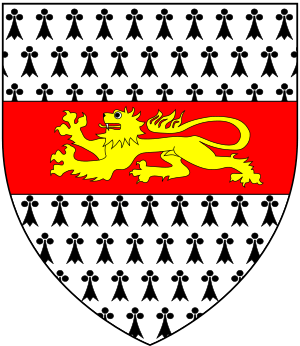 Arms of Proby: Ermine, on a fess gules a lion passant or

Shortly after 1617 Elton was purchased by Sir Peter Proby, a former Lord Mayor of London, from the Sapcote family. The house was rebuilt between 1662 and 1689 by his grandson Sir Thomas Proby, 1st Baronet, incorporating the chapel and gatehouse of a previous 15th century building. A new wing was also added to the west. He was succeeded by his younger brother John Proby (died 1710) who added a further extension. The estate descended via John's cousin to John Joshua Proby, 1st Earl of Carysfort, who carried out extensive modifications in the Gothic style between 1780 and 1815, of which part still remains.

In about 1855 it descended to Granville Leveson Proby, 3rd Earl of Carysfort, who employed the architect Henry Ashton to remodel the house, rebuilding the north-west cross wing and refacing other wings in stone. In 1860 the chapel range was extended and a bay between the chapel and the house rebuilt. Granville Leveson Proby, 4th Earl of Carysfort added a tower to the chapel block and a billiards room and kitchens to north-east. William Proby, 5th Earl of Carysfort demolished an 18th century tower and built two octagonal turrets. Various other changes have taken place since.

On the 5th Earl's death in 1909 the estate passed, via his sister Lady Elizabeth Hamilton, to her son Colonel Douglas Hamilton who adopted the surname of Proby and laid out new gardens which were further developed by Meredyth Proby from 1980. The property still remains in the private ownership of the Proby family.

The south front (garden) incorporates the 15th century tower and chapel which were built at the time of Henry VII. The Marble Hall and main staircase were designed by Henry Ashton and are remarkable examples of a mid-Victorian revival of mid-18th-century style. The Drawing Room, the largest room in the house, was formed from the medieval chapel around 1740. The 18th century ceiling with its enriched cornice and frieze remains, but the present decoration dates from 1860. The Dining Room was built in 1860 and was also designed by Ashton. The three large Gothic windows are exact copies of the windows that were in the north wall of the medieval chapel.

The Library contains a large collection of books representing a continuous interest from the time of Sir Thomas Proby. From the Main Library a short passage leads to the Inner Library situated in the medieval Sapcote Tower. Other rooms of special interest are the Lower and Upper Octagon rooms, the Yellow Drawing Room and the Ante Dining room. The current chapel was formed from part of the undercroft of the Sapcotes' chapel and has 15th century vaulting.

All content from Kiddle encyclopedia articles (including the article images and facts) can be freely used under Attribution-ShareAlike license, unless stated otherwise. Cite this article:
Elton Hall Facts for Kids. Kiddle Encyclopedia.