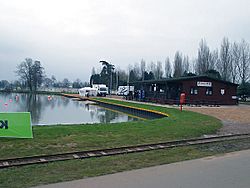 Billing Aquadrome is a leisure park in Great Billing, in the eastern district of Northampton, England. Facilities within the 235-acre (1 km2) park, which was built around various mature gravel pits, include a caravan site, marina and funfair. It is also frequently home to a wide variety of shows throughout the year, including music events and car shows, such as the world's largest annual Land Rover show and the American Car Show. It also hosts the Northampton Balloon Festival.

At the edge of the park is Billing Mill, a family pub, which is housed in a converted water-mill.

The aquadrome has had a variety of railway attractions over its lifetime. In April 1949, a new miniature railway was opened, featuring a model of a Royal Scot locomotive.

All content from Kiddle encyclopedia articles (including the article images and facts) can be freely used under Attribution-ShareAlike license, unless stated otherwise. Cite this article:
Billing Aquadrome Facts for Kids. Kiddle Encyclopedia.