Desborough is a town in Northamptonshire, England, located in the Ise Valley between Market Harborough and Kettering. The town was an industrial centre for weaving and shoe-making in the 19th century, and has a long association with the Co-operative movement. Modern Desborough is a residential centre, with new homes and industry being developed to the north of the old town.

Desborough developed around the spinning and weaving industries, by the 19th century specialising in silk. Many archaeological finds from the Iron Age and Anglo-Saxon periods have been made in the town, some of which are in the collections of the British Museum.

Desborough's origins lie in the Bronze Age around 2000 BC. Urns from that period have been found in and around the town. The most important archaeological find was the 1st-century Desborough Mirror, which is now in the British Museum, as is the Anglo-Saxon Desborough Necklace, found in the Paddock Lane area of the town, which comprises gold beads, a gold cross and a red garnet. Other stone artefacts are on display in the parish church. 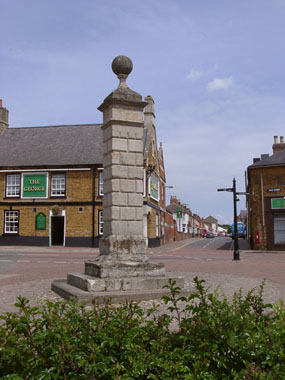 Notable buildings in the town include the 13th-century parish church of St Giles.

Domesday Book (1086) refers to Desborough as a "place of judgement". In fact, the name itself is thought to have derived from 'Disburg', which meant a sacred and fortified place. In the High Street, as a centrepiece of what is now the Market Square, stands a pillar that is called locally the Town Cross despite being a square column with a stone ball on top. It is thought to have been a gateway pillar from Harrington Hall.

Desborough is 5 miles (8 km) south-east of Market Harborough, north-west of Kettering and south-west of Corby. The Kettering Leg of the Student Cross pilgrimage leaves from near Desborough every year.

The A6 Rothwell–Desborough Bypass opened on 14 August 2003.

Between 1857 and 1968, Desborough had a railway station, opened and operated by the Midland Railway, (later the London, Midland and Scottish Railway and, after nationalisation, British Rail), as part of the extension of a line from Leicester to Bedford and Hitchin. It was closed as part of the Beeching cuts.

St Giles Church is the oldest surviving building in the town, having been built in about 1225. It is believed to stand on the site of an earlier Saxon church. Relics of the town's history include part of an Anglo-Saxon cross carved from stone, a Tudor rood screen, and reminders of the Civil War. Close by the church is the 18th-century Church House with its stucco and Doric pillars, which became Desborough House in the 19th century and is now the Services Club.

On 7 September 1969 the Anglican (Church of England) and Methodist partnership was inaugurated in the presence of the Bishop of Peterborough and the Chairman of the Oxford District. Since that time a Methodist minister has been working in equal partnership with the Anglican vicar. St Giles is part of the United Benefice of Desborough and Brampton Ash with Braybrooke and Dingley.

St Giles has regular church festivals including one of the United Kingdom's longest running (since 1998) and largest (over 100 trees) Christmas Tree Festival. The trees are contributed by local organisations, companies, individuals and families.

In addition to the parish church there is a Baptist church, a United Reformed Church, and the Roman Catholic Church of the Holy Trinity.

The Old Manor House in Gold Street retains many features of its late 17th-century origins. Ferdinand Poulton, a Roman Catholic lawyer, was Lord of the Manor and reputedly one of the 1605 Gunpowder Plot conspirators.

In the 17th century the town developed as a spinning and weaving centre. Using local wool and flax, the town's factories produced fine cloth and linen until the mid 19th century. Silk weaving then developed in a Paddock Lane factory.

To counter exploitation by agents and employers, local men founded the Desborough Co-operative Society in 1863. Starting with local shops and then a corset and lingerie factory, the Desborough Co-op still has a department store, a bank, a supermarket, a travel agents, a ladies' shoe and clothing shop and a couple of corner stores.

In the centre of the Town there is the Ritz Banqueting Suites which underwent a £1 million refurbishment and now there is a very successful adjoining Tapas Bar and Hotel called The R Inn owned by the same company. Between them, these businessese employ over 30 local staff.

The former Co-operative Society Sports Ground with its football field and tennis courts is now the site of a major housing development called Desbeau Park. Desbeau was the name of one of the range of lingerie made at the Corset Factory.

The Desborough Co-op was recently purchased by the larger East Midlands Co-op, which has since closed the bank branch and the ladies' shoe and clothing shop. It has also turned one of the corner shops into an undertaker's. The former RS Lawrence's shoe factory site on the High Street was sold to Kettering Borough Council.

To the north of the Town, on the Harborough Road, is Rigid Containers, which has just undergone a £4 million refurbishment.

Desborough has an up-to-date leisure complex, built in the later months of 2012, which includes a gym, a café, a football court, a basketball court, and an outside skate park.

Magnetic Park is a project to build a business park in Desborough, most construction has been completed.

There were plans to build a Sainsburys near Magnetic Park but Kettering Borough Council’s planning committee turned down the company’s proposals. Committee members voted 4-3, with one abstention, against the plans. On 25 January 2012, the Council again rejected the plans by 7 to 1 votes, with one abstention.

Plans have been submitted to Kettering to redevelop the town centre Lawrence Factory site with a new Tesco store. In September 2011, Kettering published a report recommending approval of the Tesco plans, but the Planning Committee due to consider the application on 13 September 2011 was cancelled. On 25 January 2012, Kettering Borough Council voted unanimously to approve the plans.

In July 2014, Tesco announced publicly that it was pulling out of the planned development of the former Lawrence site.As reported in local papers. Now the process begins again to find a suitable use for the site that both local residents and the councils can agree upon.

Magnetic Park is in the process of being developed for industrial use. It already holds an engineering firm and the Great Bear Distribution Centre. More recently planning permission has been granted to build a Waste to Energy Centre at Magnetic Park by Northamptonshire County Council. This plan was submitted by Origin Renewable Energy to build a two-stage gasification plant in order to supply local businesses and the new homes on Grange two with hot water. Municipal and commercial waste destined for landfill and not recyclable will be used. A Community Liaison Group(CLG) has been set up, four of its members have already visited a state of the art energy centre in Sarpsborg Norway. The Energos plant in Sarpsborg is of the type that is proposed for Desborough. Energos already operate 8 Energy Centres on main land Europe including one at Stavanger. The next stage is to obtain an environmental certificate. Work is planned to start in 2013 and be completed in 2015. A group of local residents under the name of 'Fresh Air for Desborough' is campaigning against this development.

All content from Kiddle encyclopedia articles (including the article images and facts) can be freely used under Attribution-ShareAlike license, unless stated otherwise. Cite this article:
Desborough Facts for Kids. Kiddle Encyclopedia.