Rothwell is a market town in the Kettering district of Northamptonshire, England. It is located south of Desborough, southeast of Market Harborough, southwest of Corby and northwest of the larger town of Kettering. It is twinned with the French town of Droué. The nearest railway station is Kettering on the Midland Main Line.

Rothwell - "the place of the red well"

The ridge on which present day Rothwell stands, overlooking the gentle Ise Valley, has witnessed the comings and goings of successive generations. Four thousand years ago Bronze Age mourners buried their dead alongside offerings of food in vessels. The Romano-British people, two thousand years later, built a settlement in what is now Rothwell. Dark Age invaders came next and founded the Danish settlement of "Rodewell" or "place of the red well", presumably so-called because of the area's many freshwater springs coloured red by iron and other minerals.

By the early Middle Ages Rothwell, or "Rowell" as it is known locally, was already a town of some importance, dominating the then smaller settlement of Kettering (a state of affairs which persisted until the arrival in Kettering of the railway). A charter, granted by King John in AD 1204 permitting a weekly market and annual fair, confirmed the trade. Both a market and a fair are still extant. The market is held every Monday and the fair, called "Rowell Fair", takes place on Market Hill during the week following Trinity Sunday.

The town has a rich history and possesses a large parish church, the longest in the county and complete with bone-crypt, and the Market House built by Thomas Tresham in 1578. Rothwell was once one of the three largest towns in Northamptonshire, the other two being Northampton and Stamford (which is now in Lincolnshire).

In 1204 King John issued a royal charter granting Rothwell the right to hold a market every Monday:

John, by the grace of God King, be it known that we have granted, and by this our present charter do confirm to our beloved and faithful Richard - Earl of Clare and his heirs that they may have their market of Rowell on Monday, with all the liberties and free customs to that market belonging as it was formerly [held] on Sunday, so that nevertheless it be not the hurt of neighbouring markets. Besides which we grant and by this our charter we have confirmed to the same Earl Richard and his heirs, that they may have yearly, a fair at Rowell at the feast of the Holy Trinity for and during the five days, that is to say on the eve of the Holy Trinity and on that day and on three following days, so nevertheless that such fair will not be to the hurt of neighbouring fairs. Wherefore we will and firmly declare that the aforesaid Earl Richard and his heirs may and hold the aforesaid market and the aforesaid fair of us and our heirs in perpetuity well and in peace, freely and quietly, rightly, fully and with honour, with all the liberties and free customs as aforesaid. Witness the Lord H. Archbishop of Canterbury, J Norwich and W. London Bishops etc. Given at Westminster the 26th day of January, in the fifth year

The granting of the charter is celebrated annually by the week-long Rowell Fair. The fair is opened on the first Monday after Trinity Sunday each year by the Proclamation, which in 2016 will take place on 23 May. Starting at 6am at the west door of Holy Trinity church, the bailiff of the Lord of the Manor rides through the town accompanied by a guard of halberdiers and the Rowell Fair Society Band. At each public house he pauses to read aloud the charter. At the conclusion of each reading the crowd cheers "God save the Queen and the Lord of the Manor" and the band plays the National Anthem. The proprietor of the public house then serves the bailiff and his guards with drinks including the traditional Rowell Fair rum and milk. The local townspeople then attempt to disarm the halberdiers before the party moves on to the next public house.

Pubs in the town traditionally remain open after the proclamation, and so much merriment is to be had all through the morning. It has been suggested, however, that the traditional route for the fair should be moved to avoid town-centre traffic congestion. 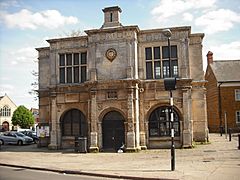 Situated on Market Hill, designed by William Grumbold for the somewhat eccentric Thomas Tresham (1545–1605) who was also known as "Thomas the Builder" because of his passion for strange and unusual buildings. As a Catholic at a time of religious persecution, he was to spend long periods in prison for his beliefs. Unable to openly practise his faith, he encoded symbols of it into his buildings. The Rushton Triangular Lodge reflects the trinity and Market House is cross shaped. Tresham gifted the Market House to the town, of which he was Lord of the Manor, but although work started in 1577 it would be 300 years before it was finished by local architect J A Gotch. 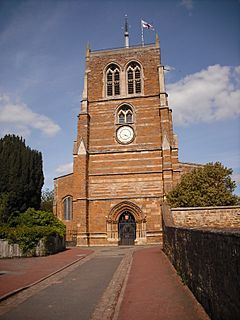 Since 12 June 1950, the church has been designated a Grade 1 listed building.

Although the south chancel wall, with its corbel table, complete with three round-headed windows date from the 11th century and the west tower dates from the 1170s, most of the church is 13th century. The tower at one time had a spire, but in 1660 this collapsed, severely damaging the nave.

The church is 173 feet long, making it the longest church in Northamptonshire.

The church organises a wide range of events including, in June 2013, a concert by noted British accordionist John Kirkpatrick.

The church has one of only two known bone crypts or "charnel houses" in the country; it contains the remains of around 1,500 people. The other surviving ossuary is in St Leonard's Church in Hythe, Kent.

Holy Trinity has seven, late 15th century misericords, along with one from the 1980s, which is a floral decoration in memory of Doris Willcox who died in 1974.

Built in 1735, Rothwell United Reformed Church has a simple facade but has a remarkable interior in a sophisticated classical style. The history of Non-Conformism in Rothwell stretches as far back as 1655, making the town the birthplace of the movement in the English Midlands.

Until the close of the 2011-2012 season, Rothwell had another football club, Rothwell Town F.C. Having been as high up the football pyramid as Southern Football League Premier Division, the team are currently without a home, due to ownership/rent issues at the ground on Cecil Street, close to Rothwell Junior School.

Rothwell is twinned with the small French town of Droué, near Blois in central France. 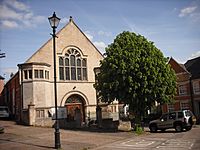 All content from Kiddle encyclopedia articles (including the article images and facts) can be freely used under Attribution-ShareAlike license, unless stated otherwise. Cite this article:
Rothwell, Northamptonshire Facts for Kids. Kiddle Encyclopedia.