Brackley is a town in south Northamptonshire, England. It is about 19 miles (31 km) from Oxford and 22 miles (35 km) from Northampton. Historically a market town based on the wool and lace trade, it was built on the intersecting trade routes between London, Birmingham and the English Midlands and between Cambridge and Oxford. Brackley has connections with Formula 1 as it is close to Silverstone and home to the Mercedes AMG Petronas F1 Team.

Brackley, originally also known as Brachelai or Brackele, was held in 1086 by Earl Alberic. After this it passed to the Earl of Leicester, and to the families of De Quincy and Roland.

In the 11th and 12th centuries Brackley was in the Hundred of Odboldistow and in the Manor of Halse. Richard I (The Lionheart) named five official sites for jousting tournaments so that such events could not be used as local wars, and Brackley was one of these. The tournament site is believed to be to the south of the castle where the A422 now passes.

Henry III attacked and destroyed the castle in 1173. The site was later granted to the Hospital of SS. James and John (see below).

The town was the site of an important meeting between the barons and representatives of the King in 1215, the year of Magna Carta. Magna Carta required King John to proclaim rights, respect laws and accept that the King's wishes were subject to law. It explicitly protected certain rights of the King's subjects, whether freemen, serfs, slaves or prisoners — most notably allowing appeal against unlawful imprisonment. King John and the barons were to have signed Magna Carta at Brackley Castle, but they eventually did so at Runnymede.

Market day was on Sundays until 1218, when it was changed to Wednesdays. It is now on Friday mornings.

The Tudor antiquary John Leland visited Brackley, where he learned 'a Lord of the Towne' named Neville had (at an uncertain point in the past) had the parish vicar murdered. The writer Daniel Codd observed that in the grounds of St Peter's Church, a human-shaped stone effigy is sometimes pointed out as being connected with the event.

In 1597 the town was incorporated by Elizabeth I. It had a mayor, six aldermen and 26 burgesses.

In 1602, the metaphysical poet John Donne was elected as Member of Parliament for the constituency of Brackley.

Brackley used to be known for wool and lace-making.

Brackley used the poor house at Culworth until 1834, when Parliament passed the Poor Law Amendment Act and as a result Brackley Poor Law Union was founded. A workhouse for 250 people was built in 1836, southwest of the town on Banbury Road. It was demolished in the 1930s.

Brackley Castle was built soon after 1086. Its earthwork remains lie between Hinton Road and Tesco. It comprised a motte mound 10 feet (3.0 m) high and approximately 44 yards (40 m) in diameter with an outer bailey to the east. Archaeological excavation has revealed evidence of a ditch defining the perimeter of the bailey. Two fishponds originally lay outside the ditch but have subsequently been infilled – however south of St. James Lake may have formed a part of this. Brackley Castle may have gone out of use in 1147. It was destroyed in 1173.

The oldest part of the Church of England parish church of Saint Peter at the eastern end of the town centre is an 11th-century Norman south doorway. Both the four-bay arcade of the south aisle and the west tower with its niches containing seated statues were added in the 13th century. Next the chancel was rebuilt, probably late in the 13th century. The north arcade and the windows in both the north and south aisles were probably added early in the 14th century, about the same time as the Decorated Gothic chapel was added to the chancel.

In about 1150 Robert de Beaumont, 2nd Earl of Leicester founded the Hospital of St. James and St. John. Its master was a priest, assisted by a number of religious brothers. Its duties included providing accommodation and care for poor travellers. In the 15th century there were complaints that successive masters were absentees, holding other livings at the same time as being in charge of the hospital. The hospital was closed in 1423 for maladministration but re-established in 1425. In 1449 a master was appointed who seems to have continued the practice of non-residence while holding parish livings elsewhere. In 1484 the patron, Viscount Lovell granted control of the hospital to William Waynflete, Bishop of Winchester, citing its failure to give hospitality and alms.

The oldest part of the chapel is the west doorway, which is late Norman. Most of its windows are slightly later, being Early English Gothic lancet windows. The trio of stepped lancets above the west doorway are late 13th century. The Gothic Revival architect Charles Buckeridge restored the chapel in 1869–70. 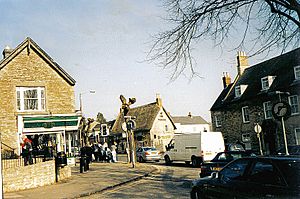 The junction with Buckingham Road and High Street, Brackley in 2004

The almshouses were founded in 1633 by Sir Thomas Crewe of Steane. They have one storey plus attic dormers. They were originally six houses but by 1973 they had been converted into four apartments.

Brackley Manor House was also a 17th-century Jacobean building that also originally had one storey plus attic dormers. In 1875–78 the Earl of Ellesmere had it rebuilt on a larger scale, in the same style but retaining only the doorway and one window of the original building. It is now Winchester House School, a coeducational preparatory school for children aged from 3–13. It used to be a Woodard School.

The town hall is Georgian, built in 1706 by the 4th Earl of Bridgewater. The ground floor was originally open but has since been enclosed. Market Place and Bridge Street feature number of other early 18th-century houses and inns, mostly of brick and in several cases combining red and blue bricks in a chequer pattern.

The town park belongs to the National Trust.

Brackley is close to the A43 road, which now bypasses the town, linking it to Towcester and Northampton to the north-east and the M40 motorway to the west. The A422 links it to Banbury and Buckingham.

The town has numerous bus services and is connected to major towns and cities including Banbury (499, 500), Bicester, Buckingham, Towcester, Oxford and Northampton (8). In 2003 the X38 Oxford-Northampton express service became the X6 with the introduction of the 88 to serve villages en route to Northampton (such as Towcester, Blisworth and Milton Malsor). In September 2007, Stagecoach Midlands' Oxford-Brackley-Towcester-Northampton services were reduced with the merging of the 88 and X6 as route X88. In September 2011 the 88 service covering the Northampton to Oxford route, was replaced by the 8. The route of which starts at Northampton and now terminates at Bicester. After 2016, the 8 was renumbered once again to 88 with timetable changes. A few months later, the 88 was further reduced only running between Northampton and Silverstone, with one off-peak journey numbered X88 and terminating at Brackley Tesco. 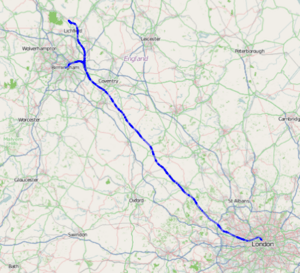 Approximate route of the London-Birmingham section based on the official description, also available as KML. It would pass just south and west of Southam and through Brackley.

The nearest railway station is Kings Sutton, about 6 miles (10 km) west of the town. Brackley had two railway stations of its own that were closed in the 1960s.

Brackley's first station, known in its latter years as Brackley Town, opened in May 1850 as part of the Buckinghamshire Railway's Buckingham and Brackley Junction line between Verney Junction and Banbury Merton Street via Buckingham. The London and North Western Railway operated the line from the beginning and absorbed the Buckinghamshire Railway Company in 1879. British Railways withdrew passenger trains from the line through Brackley Town station in January 1961 and closed the line to freight in 1966.

Brackley's second station was Brackley Central, opened in March 1899 on the Great Central Main Line, which was the last main line to be built between northern England and London. The GC Main Line included Brackley Viaduct across the Ouse Valley southeast of the town, which was 255 yards (233 m) in length, 62 feet (19 m) high, had 20 brick arches and two girder spans. British Railways withdrew passenger trains from the line through Brackley Central in September 1966. Brackley Viaduct was demolished in sections early in 1978.

Chiltern Railways is said to want to restore services between London Marylebone and Rugby along the former Great Central Main Line. This would have Brackley Central railway station reopen with direct services to London, Aylesbury and Rugby. However, the Department for Transport has chosen part of the former Great Central route north-west of Brackley as part of the new High Speed 2 line between London and Birmingham. A station at Brackley is not currently proposed.

The Brackley Morris Men are one of only seven 'traditional Cotswold' sides remaining in England, and the only one to survive in Northamptonshire. Their history dates back to the 1600s when a solid silver communion plate was given to the parish. The plate which is still in the possession of St Peter's Church is dated 1623, and is inscribed with the names of seven men, whom local folklore believes to have been the morris dancers. In 1725 the men were paid half a guinea to dance at the Whitsun Ale at Aynho House. In 1766 their 'Squire' was arrested in Oxford for his insolence and committed to Bridewell as a vagrant. In 1866 an article in the Oxford Chronicle reported on their performance in Banbury, describing their 'many coloured ribbons and other gaudy finery', and the 'witless buffoonery' of their 'fool'. The side still performs today.

Brackley Town Football Club, known as the Saints, play in National League North. Its finest season was in 2013–14 when it reached the FA Cup Second Round having beaten League One side Gillingham 1–0 in a First round replay following a 1–1 draw. Brackley Town's ground is St James Park. Its closest rival in this league is Oxford City F.C.

Brackley has a tennis club, a leisure centre and swimming pool and a martial arts academy.

South of the town is St. James lake, a balancing lake of almost 3 acres (1 ha) created in 1977. Fishing in the lake is managed by a local angling club. The lake is in a 5 acres (2 ha) wildlife park that is open to the public.

All content from Kiddle encyclopedia articles (including the article images and facts) can be freely used under Attribution-ShareAlike license, unless stated otherwise. Cite this article:
Brackley Facts for Kids. Kiddle Encyclopedia.