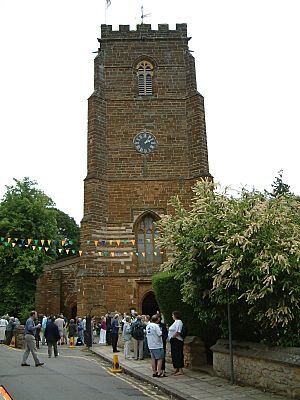 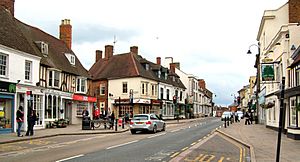 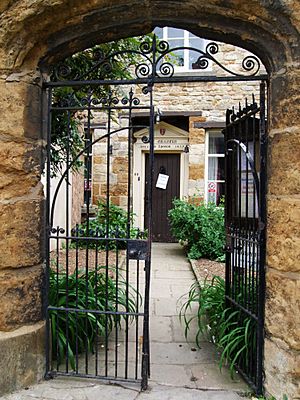 Towcester ( TOE-stər), the Roman town of Lactodorum, is an affluent market town in south Northamptonshire, England.

The town is about 8 miles (12.9 km) south-west of Northampton and about 10 miles (16.1 km) north-west of Milton Keynes, the nearest main towns. Oxford is about 30 miles (48.3 km) south-west via the A43 road, M40 motorway and A34 road. The A43 now bypasses the town to the north but the A5 road still passes through the town centre. This still carries much traffic in the north-south direction which may be bypassed to the west with the possibility of expansion of the town.

The population was 2,743 at the time of the 1961 Census and this had grown to 8,856 by the 2001 census – a growth rate of about 3% per year. It has since rapidly expanded and there are plans to expand still further with another 3,300 houses equating to an appx 8,250 increase in population. With normal growth this could see the total population rise to around 20,000 people by 2020 (based on the current multiplier of 2.5 persons per average household). The expansion will include an A5 north-south bypass west of the town. Improvements to the links to the A43 and Watling Street roundabout took place in the first half of 2015 and including traffic light controls.

The town has good shopping facilities with the four major supermarket chains of Waitrose, Tesco, Co-op and Aldi also BM Stores and Poundstretcher have recently opened branches. There is also range of smaller shops and numerous restaurants of various cuisines and national chains such as Costa and McDonald's. All the major banks are present (except HSBC, which closed September 2015) and Nationwide Building Society are present, as is a main Post Office.

St. Lawrence's Church, Church of England, stands in the middle of the town. It has a 12th-century Norman Transitional ground plan and foundation, probably laid over a Saxon 10th century stone building. Its ecclesiastical heritage may well relate back to Roman times as St Lawrence was patron saint of the Roman Legions. The building was reconstructed in the Perpendicular style 1480–85 when the church tower was added. Permission to quarry stone for this restoration from Whittlebury Forest was granted by Edward IV and later confirmed by Richard III on his way towards Leicestershire and his death at the Battle of Bosworth Field.

The church contains a "Treacle" Bible, a table tomb and cadaver of Archdeacon Sponne, Rector 1422–1448. The Archdeacon started what was thought to be the oldest Grammar school in Northamptonshire, which was merged with the old Secondary Modern School in Towcester to produce Sponne School. It is also claimed that Pope Boniface VIII was a rector of the church before his elevation to the position of Pope. The church tower contains more bells than probably any other parish church in the land: a fine peal of 12 bells and a chime of 9 bells which ring the hours and chime tunes at frequent intervals.

When the Phipps family brewed its final batch of beer from the Towcester brewery back at the end of the 19th century, no one thought that Towcester would ever see brewing in the town again. However, over a hundred years later the smell of malt and hops can once again be experienced if you happen to be around the old grade 2 listed Towcester Mill Brewery in Chantry Lane. Although the mill was recorded in the Domesday Book (1086), the oldest part of the building is just over two hundred years old. The Mill’s working gear was powered by water, and was used to grind corn into flour, and to mix animal feed, and is believed to be the only water mill in Northamptonshire with a working turbine.

The town has an Air Cadet squadron, 1875 (Towcester) Sqn ATC located near to Sponne School and The 1st Towcester scouts and guides group.

Towcester lays claim to being the oldest town in Northamptonshire and possibly, because of the antiquity of recent Iron Age finds in the town, to be one of the oldest continuously inhabited settlements in the country. There is evidence that it was settled by humans since the Mesolithic era (middle stone age). There is also evidence of Iron Age burials in the area.

In Roman Britain, Watling Street, now the A5 road, was built through the area and a garrison town called Lactodurum established on the site of the present-day town. Two candidate sites for the Battle of Watling Street, fought in 61AD, are located close to the town, these are Church Stowe which is located 7 km to the north and Paulerspury which is 5 km to the south. A stone female head, that mixes Celtic and Roman styles, was found on Watling Street outside the town and was given to the British Museum in 1903.

The Saxon period and Medieval age

When the Romans left in the 5th century, the area was settled by Saxons. In the 9th century, the Watling Street became the frontier between the kingdom of Wessex and Danelaw, and thus Towcester became a frontier town . Edward the Elder fortified Towcester in 917. In the 11th century, the Normans built a motte and bailey castle on the site. Bury Mount are the remains of the fortification and is a scheduled Ancient Monument. It was renovated in 2008 with an access ramp added and explanatory plaques added.

In the 18th and early 19th centuries, in the heyday of the stagecoach and the mail coach, Watling Street became a major coaching road between London and Holyhead, and Towcester flourished, becoming a major stopping point. Many coaching inns and stabling facilities were provided for travellers in Towcester, many of which remain.

The coaching trade came to an abrupt halt in September 1838 when the London and Birmingham Railway was opened, which bypassed Towcester and passed through Blisworth, barely four miles away but enough to result in Towcester quickly reverting to being a quiet market town. By 1866 however, Towcester was linked to the national rail network by the first of several routes which came together to form the Stratford and Midland Junction Railway, known as the "SMJ". Eventually, from Towcester railway station it was possible to travel four different ways out of the town: to Blisworth (opened May 1866); to Banbury (opened June 1872); to Stratford-upon-Avon (opened July 1873); and finally Olney (for access to Bedford, opened December 1892). The latter line however was an early casualty, closing to passengers in March 1893 although it continued to be used by race specials up until the outbreak of World War II. The Banbury line closed to passengers in July 1951 and the rest in April 1952. Goods traffic lingered on until final axing in February 1964 as part of the Beeching cuts. The site of Towcester railway station is now a Tesco supermarket.

Towcester might have gained a second station on a branch line of the Great Central Railway from its main line at Brackley to Northampton, but this branch was never built.

20th century and beyond

The motor age brought new life to the town. Although now bypassed by the A43, the A5 trunk traffic still passes directly through the historic market town centre causing traffic jams at some times of the day. The resulting pollution has led to the town centre being designated an Air quality management area. An A5 north-south bypass is likely with plans for expansion of the town being planned by the West Northamptonshire Development Corporation.

All content from Kiddle encyclopedia articles (including the article images and facts) can be freely used under Attribution-ShareAlike license, unless stated otherwise. Cite this article:
Towcester Facts for Kids. Kiddle Encyclopedia.