Bury Mount Motte is the remains of an earthwork motte and bailey fortification or ancient castle, and has been designated a Scheduled Ancient Monument. The Motte probably dates back to the 11th Century when it was a Norman fortification but over time was subject to neglect. 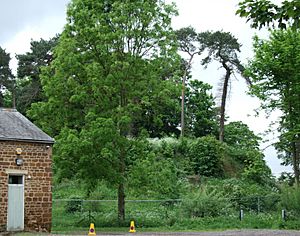 Bury Mount looking north west from the banks of the River Tove, May 2008 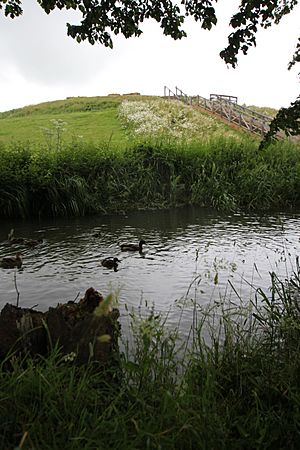 The Motte is in Moat Lane in the Roman town of Towcester, England, located on the Roman Road of Watling Street now the A5 trunk road which runs from Dover to Wroxeter via London. It is similar to other local Mottes located at Northampton, Buckingham, Little Houghton and Newport Pagnell, Buckinghamshire. It would have been strategically placed to control primary transport routes and river crossings. The Towcester Motte controlled the junction of Watling Street and long distance route from Southampton to Stamford which went through Winchester, Oxford, Brackley and Northampton, now the A34 and A43 trunk roads. The Motte is located in Towcester on the north-east side of the A5 in Moat Lane, at the side of Towcester Town Hall next to St Lawrence Church and near the Forum Building which is the Home of South Northamptonshire Council; the mount also lays east of the market square. Bury Mount can also be reached by walking down Castle Lane which is off of Watling Street.

It comprised a small bailey and a tall motte surrounded by a large ditch. The motte may not have been of the standard conical mound form. More historical details are described on the South Northant's Council's website including the restoration project for the motte and all the Moat Lane area.

The most likely period for its construction was the Great Anarchy period (1135–1152), when England was divided between the supporters of King Stephen and Empress Maud. It was about the time that the Manor of Towcester passed from the Crown to the St. Hiliary family. The castle would have been used as a symbol of power, been the residence of the lord of the manor's bailiff or reeve, an encampment for troops and cavalry raised during periods of hostility and offer hospitality to the lord and his retinue whilst travelling. It was to be dominated by a large motte surrounded by a ditch and topped by a tower which created both a stronghold and a watchtower.

Documentary evidence shows that in the 15th century there was a gate at the junction of the two lanes leading into the bailey. In this area would be living quarters for the constable of the castle and the small permanent garrison, detached kitchens, a brewhouse, barns and sheds for storage of food and equipment, stabling, privies, a well and accommodation for livestock. It would have been tightly packed with buildings and would have bustled with activity when fully garrisoned.

The traditional view is that earth mottes had palisades around the summit of the motte which was approached by a flying bridge or ladder and within this well defended upper section would have been a tall timber tower. The few excavations of mottes that have occurred show they varied considerably in form. There is the possibility that Bury Mount does not follow the standard form. In 1392 it was described as a mound tower within a moat, which suggests that it would have had a stone tower as a wooden tower is unlikely at that date. Shortly before 1824, possibly whilst they were excavating away the south-west section of the mount to construct a cottage, a "subterraeneous arched passage fifteen yards in length" was found. These two documentary sources suggest that the motte may have been of a similar type to the motte excavated at South Mimms, Hertfordshire in the 1960s. Although the South Mimms motte looked like a typical castle earthwork they found that "the tower was set within the motte, and the entrance to the castle was gained via a tunnel through the motte into the tower". Most of the mound at South Mimms had been revetted so that little of the motte was visible. It was probably built around 1141 by the Earl of Essex. If the Towcester motte is of this form then it would be rare survival.

In 1392, during the ownership of Reginald de Grey, Baron Grey of Ruthyn, a record of the manor in Towcester was made. Within the castle site was the manorial hall aligned north-south, which would have housed the bailiff and important guests and also be the place where the manorial court was held. It had chambers at both ends. The southern chamber, facing towards the gate appears to have been principal first-floor chamber, usually called a solar, which like the Hall had a stone slated roof. The other chamber was thatched, suggesting that it may have been the bailiff's accommodation. Adjacent was a detached kitchen which with a stable attached. Both were thatched with straw. There were two great barns which were "at a distance" plus an oxhouse with stable and carthouse under one roof, a dovecote and a sheepfold for 200 sheep.

In the late 15th century the Manor castle appears to have been vacated and a new Manor House constructed in Park Street Towcester. Part of this building still survives and is known as the Mint House.

In the winter of 1643/4 Towcester became the winter headquarters of the Royalist cavalry under Prince Rupert. The town was re-fortified and Bury Mount was converted into a platform for 2 cannon which was probably slighted when the Royalists left in the spring of 1644. From then on Bury Mount was used as an orchard and then as gardens for a cottage built at the foot of the mound. The cottages have now been demolished.

The remains were restored in 2008 with an access ramp, landscaping around the River Tove and mill stream and explanatory plaques. During 2013-2016 South Northamptonshire Council implemented the Moat Lane Regeneration Scheme which centred on the Mount. This saw the building of the Forum to which the district council relocated in early 2015, plus homes and small retail units. There is also renovation of other older historic buildings in the area and empty cottages which are in Moat Lane.

All content from Kiddle encyclopedia articles (including the article images and facts) can be freely used under Attribution-ShareAlike license, unless stated otherwise. Cite this article:
Bury Mount Facts for Kids. Kiddle Encyclopedia.