Delapré Abbey is an English neo-classical mansion in Northamptonshire.

The mansion and outbuildings incorporate remains of a former monastery, the Abbey of St Mary de la Pré (the suffix meaning "in or of the Meadow"), near the River Nene 1 mile (1.6 km) south south-east of Northampton. It was founded as a nunnery about the year 1145 devoted to the congregation of the major Abbey of Cluny in Burgundy, France.

The Abbey's expansive sloping grounds are a nationally protected Wars of the Roses battlefield, as a one-time site of the advance of the Yorkists during the Battle of Northampton (1460).

The abbey was founded by an Anglo-Norman Earl of two counties, Simon de Senlis, during the reign of King Stephen and later benefited from its paying for a Royal Charter granted by King Edward III. At its founding the abbey was endowed the 3,060 acres (12.4 km2) in its ancient parish "almost entirely" save, for example, two corn mills, a fulling mill and 10 acres of marsh-meadow of St James's Abbey, Northampton: Hardingstone and held the rectories (including glebe and tithe) at Earls Barton, Great Doddington, and Fotheringhay, appointing stipended (salaried) vicars on a perpetual basis from 1224- see also related term "vicarious". Edward I added to Delapré the churches of Wollaston and Filgrave — a total of five Northamptonshire well-endowed churches — and gave Delapré the right to nominate the priest (advowson) at Fyfield, Hampshire. He is recorded as giving ten beams towards the repair of the church in 1232, and another five oaks for work on the Refectory in 1258.

Work and customs of the town and Abbey

Delapré was one of two Cluniac nunneries in England (the other being Arthington Priory in Yorkshire). The Cluniac congregation was initially a reform movement of Benedictine life. Monasteries in the congregation were supervised directly by the great abbey at Cluny. Typically a dozen to twenty nuns resided at any one time. The Guild of Weavers at Northampton made an annual procession to the Abbey church each Easter Monday where, according to the ordinances of the Guild in 1431, they would offer up:

...tapers before the ymages (images) of the Trynitie (Holy Trinity) and our Lady."

From its first foundation, the abbey gave 21s. 8d. yearly to the poor distributed by the parish church in money, bread, and fish, and a further 5s. yearly from later benefactions.

As with others, the abbey was surrendered to the crown as part of the Dissolution of the Monasteries, closing in 1538. After much later use and alteration as a private residence and in World War II service, the house and its cluster of outbuildings which replaced the abbey in phased building works spanning the 16th to 18th centuries served as the Northamptonshire Record Office and the library of the related records society. The building is Grade II* listed for heritage. A heritage shop and café overlooking its grand courtyard opened in 2017. The main building opens for educational visits, tours and weddings at the end of 2017. The Delapré Abbey Preservation Trust manages the buildings. 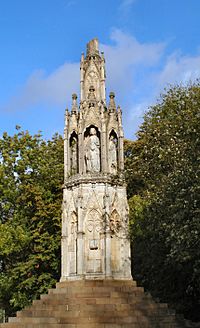 The Eleanor Cross, in the present grounds

One of three remaining Eleanor Crosses of the twelve erected, an octagonal, slim, deeply-carved tower featuring statues hewn from stone is at the south-west of the meadows and tree-lined grounds. The body of Queen Eleanor, wife of Edward I, rested at the Abbey on its journey from Lincoln to London. The king erected the crosses to mark the passage. The cross was begun in 1291 by John of Battle; he worked with William of Ireland to carve the statues. Its lower tier of stone books may have featured prayers for the Queen's soul and her biography. The grounds of Delapré are a Scheduled Ancient Monument due to their partial battlefield status.

St Andrew's Priory built by a relative of founder

In the north-west corner of the walled town depicted in John Speed's map of 1610 was the Cluniac priory of St Andrew founded by Simon de Senlis, Earl of Northampton the father of the founder of Delapré. 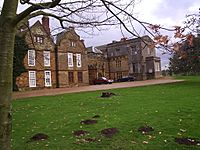 Abbesses of the Abbey of St Mary de la Pré 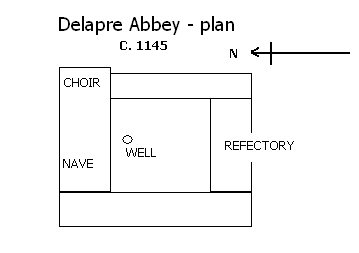 An impression of the great oval seal of the Abbey is held in the Public Records Office. It represents the coronation of the Blessed Virgin under a carved canopy.

The second Battle of Northampton (1460)

After the Battle of Northampton, which was fought on the Abbey grounds to the north of the Abbey and to the south of the River Nene, King Henry VI was captured and spent the night of 10 July 1460 at the Abbey as a prisoner. The nuns tended the wounds of those injured at the battle. Many of the battle-dead were buried in the nuns' graveyard (now the walled garden).

Print of the west front of the Abbey by J. P. Neale

In 1542 the Tate family purchased the Abbey grounds from the Crown; they started work on the gardens. Zouch Tate is recorded as having laid out a typical Elizabethan-style garden. This is thought to have been where the enclosed formal garden can now be found.

The Tates lived at Delapré until 1764, when they sold the estate to the Bouverie family. The majority of the present buildings date from this time. The design of the grounds became influenced by the style of Capability Brown. The Bouverie family changed the garden to one featuring fruit and vegetables, with orchards planted elsewhere. This was similar to the earlier fruit garden of the original abbey. Researchers believe the present walled garden is on the site of the nuns' burial ground, as evidence of graves was discovered during the garden's construction.

During the 19th century, other typical Victorian features were added, such as the rock and water gardens, and garden conservatories for peaches and grapes; a ha-ha was also constructed. The buildings for growing fruit remain. 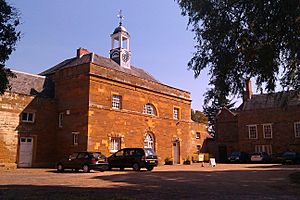 Following the success of a Heritage Lottery Fund application in 2013, a £6.3 million restoration project began in 2016. The Delapre Abbey Preservation Trust will manage the Abbey, which opened to the public for the first time in 900 years on the 17 March 2018. 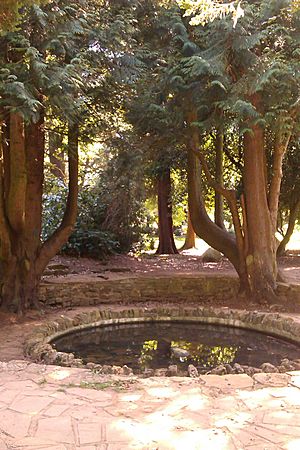 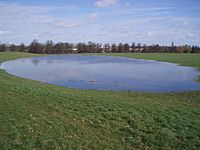 A flood lake caused by bunding 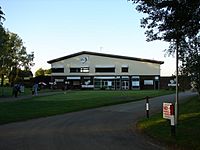 Part of the estate has been developed as the public Delapré Golf Course.

Northampton Borough Council (NBC) added bunding to the London Road side of the grounds to prevent unauthorised vehicular access to the grounds. In the wet spring of 2007, this caused a flood lake to appear, which was condemned as dangerous to the public. In November 2006, NBC's planning committee approved an application to remove the bunding but successive administrations have to date not provided funds to perform the work - despite public concerns over the flooding. The Homes & Communities Agency has since indicated an interest in using the bund material on a nearby housing development.

In 1977 and 1978 three sculptures were installed in the walled garden:

All content from Kiddle encyclopedia articles (including the article images and facts) can be freely used under Attribution-ShareAlike license, unless stated otherwise. Cite this article:
Delapré Abbey Facts for Kids. Kiddle Encyclopedia.