Rushden is a town and civil parish in the county of Northamptonshire, England.

The parish of Rushden covers an area of some 9,000 acres (36.42 km2), and is part of the district of East Northamptonshire. The population of Rushden is 29,272 (Census 2011), making it the fifth largest town in the county. The Rushden-Higham urban area, which includes the adjoining town of Higham Ferrers, has an estimated population of 36,410.

Rushden lies on the A6 midway between Bedford and Kettering. The southern limits of the town border on the county of Bedfordshire, and to its north lies the River Nene (locally pronounced Nen) which flows into The Wash. Rushden lies in a small valley, with a stream or brook known as Sidney Brook flowing through the centre of the town. During the late 1960s and 70s this stream was culverted to prevent flash flooding. From whichever way Rushden is approached, the streets and roads can be seen stretching out in the valley, with the spire of St Mary's church prominent above its rooftops. 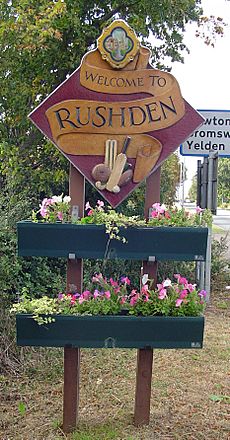 Rushden's growth has resulted from a number of industries, including lacemaking and farming, and especially shoemaking and associated trades. In the mid-1900s there were well over 100 boot and shoe factories in Rushden but today there are only four shoemaking companies left in Rushden.

One of the most renowned is Sanders and Sanders, which makes boots for the British Army and several other defence departments throughout the world. Some of the redundant factories have been converted into flats, and MPs support for government help has been limited. Today, as with many towns in England, industry in the town is varied, and mostly situated in an out-of-town industrial estate. As with the industry, town centre shopping in Rushden has changed considerably although there are still many shops. Rushden has the oldest toy shop in the county. In 1893 a short branch line railway opened linking Rushden and Higham Ferrers with the Midland Main Line. The line was closed in 1959 and dismantled. In 1991 the trackbed was converted into a pocket park. 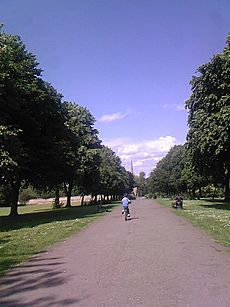 The former Rushden railway station is now owned by the Rushden Historical Transport Society, which operates a museum and real ale bar. The society often holds special events, including an annual 3-day transport cavalcade. The society aims to rebuild the branch line from Higham Ferrers to Wellingborough.

There is also a privately owned museum in Rushden which is situated in the town's Hall Park. It is open between the months of May and October.

Rushden Hall is the oldest domestic building in the town, once owned by many families throughout the years including the Sartoris family and the Pembertons family. The hall now functions as the head office of the town council and some rooms are available for hiring. It lies in 32 acres (13 ha) of land which now is a public park (Hall Park).

The 1970s ITV Police Drama series Hunters Walk was filmed on location in Rushden and the surrounding villages.

Locally Rushden is known as the home to the "Maimed, Lame and Insane" 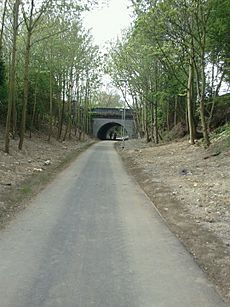 In late 2010, Rushden began to undergo a regeneration project, with the aim to making the town centre a more spacious and attractive place to shop. Rushden Splash Pool on Station Road and the Pemberton Centre, slightly out of town were planned to move to a new site to make room for in the town centre from the move of Splash and a knock on move of Alfred Street School to the Site of the Pemberton Centre. Plans were drawn up for a move to Manor Park, an open space out of town to the south side of Rushden. This however was put on hold in 2010 due widespread local opposition and the economic downturn.

In early 2011, improvements to the High Street began with regeneration on the ‘southern gateway’ and a creation of a 'town square' in the middle of the High Street.

Also a greenway cycle and foot path was created joining existing footpaths with a new one along the old railway line through the town. This linked Ferrers School to Rushden town centre and then out of Rushden to Crown Park, a small out of town retail/business park with a DIY store and Waitrose Supermarket.

Rushden has many supermarkets and convenience stores. Once Rushden was home to one of the five Safeway megastores in the country until they were bought by Wm Morrison; the store was then bought by Waitrose and turned into one of its five Food and Home stores which included a selection of home products from John Lewis. In 2006, Asda announced they would build a new £40m superstore near the town centre. The store opened in the autumn of 2006 and is now one of the biggest supermarkets in the town. In May 2007 Budgens announced it would be closing its store in the town because of the loss of trade to the new Asda store the former Budgens site is now a Wilkinson store. Asda added a new petrol filling station with a kiosk shop to the site in the autumn of 2016.

Plans are afoot for a new £50 million out of town leisure and shopping centre to be known as Rushden Lakes Shopping Centre. It is currently under construction and the first shops are due to open in 2017. The development will be situated near Waitrose just off the A45 on the site of a former dry ski slope which has been derelict for some years. The land was purchased by LXB Retail Properties for £4.5 million in 2011. The development will include shops, hotels, visitor centre, restaurants, a leisure centre and a marina, with Marks & Spencer set to act as its flagship store. A link to the River Nene will also be incorporated. The new 244-acre (99 ha) facility will create around 2,000 jobs. Despite opposition from the local councils of Corby, Northampton, Bedford and Kettering, the Rushden Lakes proposal was approved by East Northants Council in October 2012, but the application was automatically referred to the Secretary of State. The Secretary of State, Eric Pickles, approved the planning application and gave the go-ahead for the Rushden Lakes development on Thursday 12 June 2014.

Rushden has two main leisure facilities, The Pemberton Centre and Splash Pool. Both are managed by Cultural Community Partnerships on behalf of East Northamptonshire Council, as so membership covers both venues. The Pemberton Centre is a large leisure and conference centre including a large hall, conference rooms, sport hall, gym, young person’s gym, squash courts and dance studio. The Splash Pool is situated close to the town centre and includes a 25-metre-lane (82 ft) swimming pool with a learner area, beach area and indoor slide.

The town's football club, Rushden Town merged with nearby Irthlingborough Diamonds in 1992 to become Rushden & Diamonds. The new club moved to Nene Park, on the outskirts of Irthlingborough, and played there until going into liquidation in 2011.

A new club AFC Rushden & Diamonds was set up in 2011 and currently plays at the Dog & Duck, Wellingborough, in the Southern Football League, but is planning to groundshare with Rushden & Higham United at their Hayden Road ground from the 2017/18 season.

A smaller club, Rushden & Higham United compete in the United Counties League, and play at the Hayden Road ground where Rushden Town played until 1992.

Rugby Union is played at Manor Park, the home of Rushden & Higham RUFC. The club was created in October 1951. Over the years the club has played at Chamberlain's Field, near the old Higham railway station, Saffron Meadows, and the John White's ground in Rushden and now plays at Manor Park, Rushden, on pitches rented weekly from the town council.

At present, Rushden is one of the largest towns in the country without an operational railway station. However, there are proposals by The Association of Train Operating Companies to build a new railway station on the Midland Main Line (to the West of Rushden) to be known as Rushden Parkway. This is supported by local transport campaigners. Currently, the nearest railway station is at Wellingborough about five miles (6 km) away, on the Midland Main Line, although no bus service currently links Rushden to Wellingborough station - the X46 bus service stops at Midland Road in Wellingborough about half a mile from the station.

The main routes serving Rushden are Stagecoach services 50/49 with connections to Kettering and Bedford and the X46/47 providing links with Raunds, Wellingborough, Irchester and Northampton. There is also services that connect Rushden to the small villages in North Bedfordshire and has its own bus service within the town, the Rushden-Higham link. The Link runs 3 routes and are:

Several major UK airports are only within 60 miles or 1 hour driving distance of the town, including Luton, East Midlands, Birmingham and Stansted.

In terms of roads, Rushden is bypassed by the A6 which has connections to Kettering (Northbound) and Bedford and Luton (Southbound). The A45 connects Rushden to the East coast as well as Northampton and the M1 motorway westbound.

All content from Kiddle encyclopedia articles (including the article images and facts) can be freely used under Attribution-ShareAlike license, unless stated otherwise. Cite this article:
Rushden Facts for Kids. Kiddle Encyclopedia.