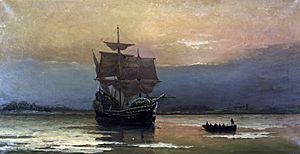 At about sixteen, Henry Samson sailed on the Mayflower in the company of his aunt and uncle Ann (Cooper) Tilley and Edward Tilley and a cousin, Humility Cooper. The Tilleys died in the winter of 1620-21. Samson and Cooper were cared for by other families, but which ones are not known.

Samson was active in Plymouth Colony. He received land grants, volunteered for the Pequot War of 1637, and did jury duty. He married Anne Plummer on 6 February 1635/6 in Plymouth. They had nine children between about 1638 and about 1654. He died on 3 January 1685. His wife died before him, date unknown. Both were buried in Cole's Hill Burial Ground in Plymouth.

All content from Kiddle encyclopedia articles (including the article images and facts) can be freely used under Attribution-ShareAlike license, unless stated otherwise. Cite this article:
Henry Samson Facts for Kids. Kiddle Encyclopedia.