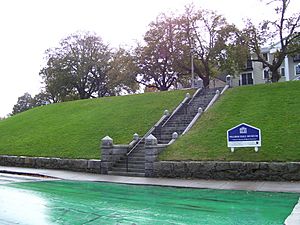 Cole's Hill is the site of the first cemetery used by the Pilgrims in Plymouth Colony. This is where they buried those who died in the winter of 1620-1621. Many were buried in secret and at night and corn was planted over their graves. This was to prevent the Native Americans from knowing how many of them had died. The hill is named after John Cole who built a house there in 1697. During the American Revolutionary War and again during the War of 1812 cannon were placed there behind earthworks to protect the town.

The hill is located on Carver Street. It is across the street from Plymouth Rock. Cole's Hill was declared a National Historic Landmark in 1960. On the top of the hill is a statue of Massasoit, who befriended the Pilgrims. There is also a monument to the Pilgrims who died during the winter of 1620-21.

All content from Kiddle encyclopedia articles (including the article images and facts) can be freely used under Attribution-ShareAlike license, unless stated otherwise. Cite this article:
Cole's Hill Facts for Kids. Kiddle Encyclopedia.