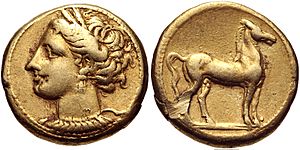 An electrum Carthaginian shekel, c. 310–290 BC, bearing the image of Tanit, consort of Baʿal Hammon.

Shekel or sheqel (Hebrew: שקל‎‎, plural שקלים sheqalim or shekels; Akkadian: 𒅆𒅗𒇻 šiqlu or siqlu) is an ancient Near Eastern unit of weight. It was a currency in ancient Israel under the Maccabees and in ancient Carthage.

The modern currency unit used in the State of Israel today is officially known as the Israeli new shekel (Hebrew: שקל חדש, sign: ₪), which replaced the Old Israeli shekel in 1985. 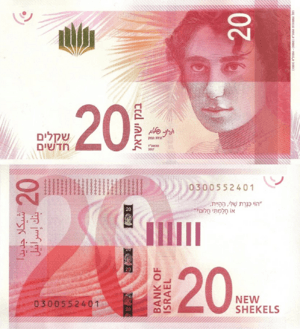 A silver Tyrian half-shekel from 102 BC bearing the image of Melqart, the Tyrian Hercules.

All content from Kiddle encyclopedia articles (including the article images and facts) can be freely used under Attribution-ShareAlike license, unless stated otherwise. Cite this article:
Shekel Facts for Kids. Kiddle Encyclopedia.