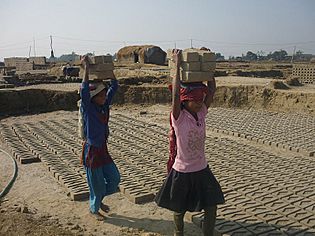 Children working, in Nepal. Very often, children are forced to work to pay off debt; which is a form of debt bondage. This image also shows child labour

Bonded labour or debt bondage (or debt slavery) is a term used to refer to a situation where someone (a debtor) has to work for the person who lent him money. Generally, the conditions of this form of labour are close to slavery. Bonded labour is one of the most common forms of modern-day slavery-like conditions. Usually,the person working gets paid very little money in return for very hard work. Very often, the exact amount to be re-paid is not defined clearly. The person doing the bonded labour will never be able to pay off the debt through work. A regular work contract will also give rights to the person being employed, and the amount of work. In a normal working contract, difficult, dangrous or exhausting work will usually get paid better. This is not the case with debt bondage.

Debt bondage is banned by the Convention of United Nation about slavery in 1956.

All content from Kiddle encyclopedia articles (including the article images and facts) can be freely used under Attribution-ShareAlike license, unless stated otherwise. Cite this article:
Debt bondage Facts for Kids. Kiddle Encyclopedia.