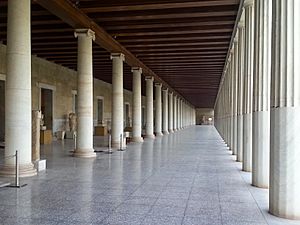 The restored Stoa of Attalos, (Athens), with busts of historical philosophers. (by Massimo Pigliucci)

Stoas are unique to Ancient Greek architecture. They were covered walkways or porticos, mainly for public use. Early stoas were open at the entrance with columns, usually of the Doric order, lining the side of the building. They were well suited for the mild climate of Greece.

Later buildings of this style had two floors. A roof supported the inner colonnades. On the second floor were shops or offices. They followed Ionic architecture. Merchants could sell their goods. Artists could display their artwork. Religious gatherings could take place. Stoas usually surrounded the marketplaces of large cities.

All content from Kiddle encyclopedia articles (including the article images and facts) can be freely used under Attribution-ShareAlike license, unless stated otherwise. Cite this article:
Stoa Facts for Kids. Kiddle Encyclopedia.