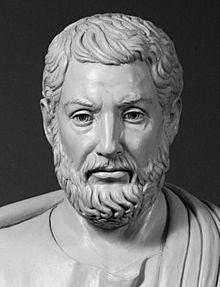 Cleisthenes is known as "the father of Athenian democracy". Modern bust, on view at the Ohio Statehouse, USA

Cleisthenes was a noble Athenian of the Alcmaeonid family. He reformed the constitution of Athens, and set it on a democratic footing in 508/7 BC. For these accomplishments, historians refer to him as "the father of Athenian democracy". He also increased the power of the Assembly, and he broke up power of the Athenian nobility.

With help from the his clan, he overthrew Hippias the tyrant (dictatorial ruler). After the collapse of Hippias' tyranny, Isagoras and Cleisthenes were rivals for power. Isagoras won the upper hand by appealing to the Spartan king Cleomenes I to help him expel Cleisthenes.

So Cleisthenes left Athens as an exile, and Isagoras held power in the city. Isagoras uprooted hundreds of people from their homes on the pretext that they were cursed, and attempted to dissolve the Council (βουλή, boulé). However, the Council resisted, and the Athenian people declared their support of it. Hence Isagoras and his supporters were forced to flee to the Acropolis, remaining besieged there for two days. On the third, they fled and were banished. Cleisthenes was subsequently recalled, along with hundreds of exiles, and he assumed leadership of Athens.

All content from Kiddle encyclopedia articles (including the article images and facts) can be freely used under Attribution-ShareAlike license, unless stated otherwise. Cite this article:
Cleisthenes Facts for Kids. Kiddle Encyclopedia.