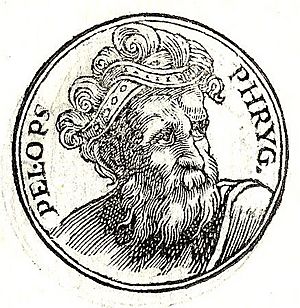 Pelops is a person from Greek mythology. He was the son of Tantalus and Dione and the father of Pittheus, Plisthenes, Atreus, Thyestes, Chrysippus and Copreus. According to the mythology, the Peloponesus was named after Pelops.

Tantaus cut Pelops into pieces and served him to the gods in a stew. He was later put back together.

All content from Kiddle encyclopedia articles (including the article images and facts) can be freely used under Attribution-ShareAlike license, unless stated otherwise. Cite this article:
Pelops Facts for Kids. Kiddle Encyclopedia.