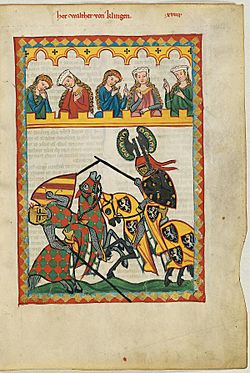 Jousting in a 13th century manuscript

Jousting is a game between two horsemen wielding lances with blunted tips, often as part of a tournament. The primary aim was to replicate a clash of heavy cavalry, with each participant trying hard to strike the opponent while riding towards him at high speed, if possible breaking the lance on the opponent's shield or jousting armour, or unhorsing him. The joust became an iconic characteristic of the knight in Romantic medievalism. The participants experience close to three and a quarter times their body weight in G-forces when the lances collide with their armour.

The term is derived from Old French, meaning "to approach, to meet". The word came into Middle English around 1300, when jousting was a very popular sport among the Anglo-Norman knighthood.

Jousting is based on the military use of the lance by heavy cavalry. It transformed into a specialised sport during the Late Middle Ages, and remained popular with the nobility in England and Wales and Germany throughout the whole of the 16th century (while in France, it was discontinued after the death of King Henry II in an accident in 1559).

In England, jousting was the highlight of the Accession Day tilts of Elizabeth I and of James VI and I, and also was part of the festivities at the marriage of Charles I. 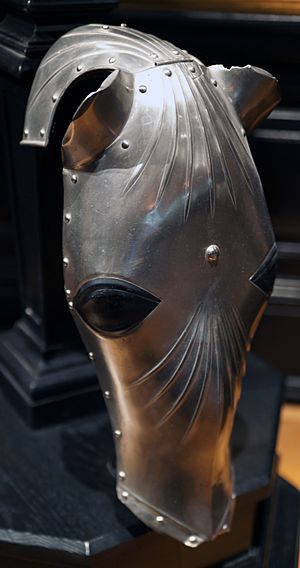 Jousting was discontinued in favour of other equestrian sports in the 17th century, although non-contact forms of "equestrian skill-at-arms" disciplines survived. There has been a limited revival of theatrical jousting re-enactment since the 1970s. Jousting exhibitions are also sometimes featured in Renaissance fairs or other historical markets.

The two most common kinds of horse used for jousting were warmblood chargers and larger destriers. Chargers were medium-weight horses bred and trained for agility and stamina. Destriers were heavier, similar to today's Andalusian horse, but not as large as the modern draft horse.

During a jousting tournament, the horses were cared for by their grooms in their respective tents. They wore caparisons, a type of ornamental cloth featuring the owner's heraldic signs. Competing horses had their heads protected by a chanfron, an iron shield for protection from otherwise lethal lance hits.

Other forms of equipment on the horse included long-necked spurs which enabled the rider to control the horse with extended legs, a saddle with a high back to provide leverage during the charge or when hit, as well as stirrups for the necessary leverage to deliver blows with the lance.

All content from Kiddle encyclopedia articles (including the article images and facts) can be freely used under Attribution-ShareAlike license, unless stated otherwise. Cite this article:
Jousting Facts for Kids. Kiddle Encyclopedia.