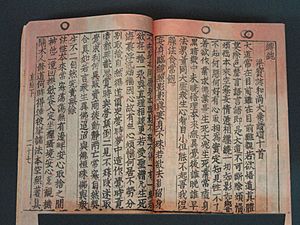 Jikji is the abbreviated title of a Korean Buddhist document, whose title can be translated "Anthology of Great Buddhist Priests' Zen Teachings". Printed during the Goryeo Dynasty in 1377, it is the world's oldest extant book printed with movable metal type. UNESCO confirmed Jikji as the world's oldest metalloid type in September 2001 and includes it in the Memory of the World Programme.

Jikji was published in Heungdeok Temple in 1377, 78 years prior to Johannes Gutenberg's acclaimed "42-Line Bible" printed during the years 1452–1455. The greater part of the Jikji is now lost, and today only the last volume survives, and is kept at the Manuscrits Orientaux division of the National Library of France.

The Jikji was written by the Buddhist monk Baegun (1298–1374, Buddhist name Gyeonghan), who served as the chief priest of Anguk and Shingwang temples in Haeju, and was published in two volumes in Seongbulsan in 1372. Baegun died in Chwiam Temple in Yeoju in 1374.

The Jikji comprises a collection of excerpts from the analects of the most revered Buddhist monks throughout successive generations. Gyeonghan compiled it as a guide for students of Buddhism, then Korea's national religion under the Goryeo Dynasty (918–1392).

All content from Kiddle encyclopedia articles (including the article images and facts) can be freely used under Attribution-ShareAlike license, unless stated otherwise. Cite this article:
Jikji Facts for Kids. Kiddle Encyclopedia.