Belle Vernon is a borough in Fayette County, Pennsylvania. It is situated along the Monongahela River abutting two other counties, Westmoreland to the north and Washington across the river. As of the 2010 census Belle Vernon had a population of 1,093.

"Bellevernon", as it was originally spelled, was laid out in 1813 by Noah Speers in northwestern Fayette County. French for "beautiful green", this was the name chosen by both Noah Speers for his little community on the Monongahela River and later by his son Louis, who founded a town with nearly the same name just up the hill (North Belle Vernon, Pennsylvania). Directly across the river lies the borough of Speers, anchoring the far side of the landmark I-70 bridge as the east bridge abutments lie in adjacent Rostraver Township.

Belle Vernon is located at 40°7′37″N 79°52′6″W﻿ / ﻿40.12694°N 79.86833°W﻿ / 40.12694; -79.86833 (40.126936, -79.868285), nestled in the northwest corner of Fayette County, with abutting borders on Washington County, to the west across the river, and Westmoreland County to the north. The predominant terrains are riverine-influenced Appalachian Plateau foothills, with emphasis on the hills which break apart settlements into small pockets of buildable lands. Roads in the area follow the lines of least difficulty, hence knit otherwise isolate pockets of settlements into greater communities.

Noah Speer was the father of Louis M. Speer, born in a log cabin on the Speer homestead/Gibsonton farm in 1810. The younger Speer played a large role in the development of Belle Vernon. During his lifetime, the population grew to about 700, and there was a steam ferry connecting Belle Vernon with Allen Township across the river. The little hamlet boasted five dry goods stores, four groceries, two glasshouses with 87 employees, a boot and shoe, cabinet, chair, wagon, saddle/harness, blacksmith/tanning shops, and two sawmills. Louis Speer owned a sandbank outside of town which produced the best quality glass sand. He also owned a large coal works and a large boat yard with more than 50 employees. Louis resided on the northwest corner of Main and 2nd streets.

Boat hulls were built at his boatyard (owned in partnership with a man named Morgan Gaskill), located on 3rd Street in the 1830s and 1840s. Several steamboats are noted to have come from the yard, including the Minstrel, which in 1842 fell off its building docks killing one and injuring 10. The St. Anthony bound for Galena, Illinois, and the Cassandra headed to Knoxville, Tennessee, came from the Belle Vernon yard. Two boats bound for customers in Pittsburgh were the Alert and the Avalanche (1847).

In 1853, Mr. Speer built a sawmill with partner William Latta, a boat builder, below the mouth of Speers Run. It was destroyed by fire in 1877 and rebuilt by his son William F. Speer. William, who spent three months in Libby Prison during the Civil War, left the army after attaining the rank of lieutenant colonel. William went bankrupt soon after completing the new mill and sold it to the Belle Vernon Saw and Planing Company in 1880.

The small village of Speers across the river, laid out in 1860 by a kinsman, gets its name from the same family. North Belle Vernon, in Westmoreland County, was laid out in 1872 by Louis and was incorporated in 1876. Louis died two years later in 1878 and is buried at the Rehoboth Presbyterian Church Cemetery.

Samuel Dougherty, a carpenter, is claimed to have built the first dwelling in North Belle Vernon on Broad Avenue near Spring Alley. He was justice of the peace, council member, school director, and judge of election, all at the same time. The first two industries were a foundry in 1873 on Broad Avenue above Spring Alley and a flour mill on Speer Street in 1874. Most of these early buildings surrounded the intersection of Short Street and Broad Avenue. Lots were not sold until 1900 and the area beyond Arch Street then began to build up. 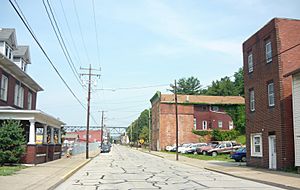 There were 612 households, out of which 17.8% had children under the age of 18 living with them, 32.7% were married couples living together, 9.6% had a female householder with no husband present, and 52.9% were non-families. 48.9% of all households were made up of individuals, and 30.4% had someone living alone who was 65 years of age or older. The average household size was 1.96 and the average family size was 2.89.

The borough, along with the abutting communities on the right bank of the Monongahela such as Fayette City and North Belle Vernon, is served by the Belle Vernon Area School District, whose buildings are located in adjacent Rostraver Township in Westmoreland County.

All content from Kiddle encyclopedia articles (including the article images and facts) can be freely used under Attribution-ShareAlike license, unless stated otherwise. Cite this article:
Belle Vernon, Pennsylvania Facts for Kids. Kiddle Encyclopedia.