Sumacs are small trees. The leaves are arranged like spirals. The flowers are in spikes. Each flower is very small, greenish, creamy white or red, with five petals. The fruits form clusters of reddish drupes called "sumac bobs". 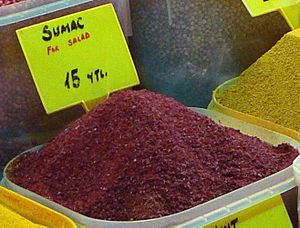 Species including the fragrant sumac (R. aromatica), the littleleaf sumac (R. microphylla), the skunkbush sumac (R. trilobata), the smooth sumac, and the staghorn sumac are grown for ornament, either as the wild types or as cultivars.

The fruits (drupes) of Rhus coriaria are ground into a reddish-purple powder used as a spice in Middle Eastern cuisine to add a tart, lemony taste to salads or meat. In Arab cuisine, it is used as a garnish on meze dishes such as hummus and tashi, it is also commonly added to Falafel. Syria uses the spice also, it is one of the main ingredients of Kubah Sumakieh in Aleppo of Syria, it is added to salads in the Levant, as well as being one of the main ingredients in the Palestinian dish, musakhan. In Afghan, Armenian, Bangladeshi, Indian, Iranian, Mizrahi, and Pakistani cuisines, sumac is added to rice or kebab. In Azerbaijani, Central Asian, Syrian, Jordanian, Lebanese and Turkish cuisines, it is added to salads, kebab and lahmajoun. Rhus coriaria is used in the spice mixture za'atar.

In North America, the smooth sumac (R. glabra) and the staghorn sumac (R. typhina) are sometimes used to make a beverage termed "sumac-ade", "Indian lemonade", or "rhus juice". This drink is made by soaking the drupes in cool water, rubbing them to extract the essence, straining the liquid through a cotton cloth, and sweetening it. Native Americans also use the leaves and drupes of the smooth and staghorn sumacs combined with tobacco in traditional smoking mixtures.

The leaves of certain sumacs yield tannin (mostly pyrogallol-type), a substance used in vegetable tanning. Notable sources include the leaves of R. coriaria, Chinese gall on R. chinensis, and wood and roots of R. pentaphylla. Leather tanned with sumac is flexible, light in weight, and light in color. One type of leather made with sumac tannins is morocco leather.

The dyeing property of sumac needed to be considered when it was shipped as a fine floury substance in sacks as a light cargo accompanying heavy cargoes such as marble. Sumac was especially dangerous to marble: "When sumac dust settles on white marble, the result is not immediately apparent, but if it once becomes wet, or even damp, it becomes a powerful purple dye, which penetrates the marble to an extraordinary depth."

Sumac was used as a treatment for several different ailments in medieval medicine, primarily in Middle Eastern and South Asian countries (where sumac was more readily available than in Europe). An 11th-century shipwreck off the coast of Rhodes, excavated by archeologists in the 1970s, contained commercial quantities of sumac drupes. These could have been intended for use as medicine, as a culinary spice, or as a dye.

Some beekeepers use dried sumac bobs as a source of fuel for their smokers.

Sumac stems also have a soft pith in the center that is easily removed to make them useful in traditional Native American pipemaking. They were commonly used as pipe stems in the northern United States.

All content from Kiddle encyclopedia articles (including the article images and facts) can be freely used under Attribution-ShareAlike license, unless stated otherwise. Cite this article:
Sumac Facts for Kids. Kiddle Encyclopedia.