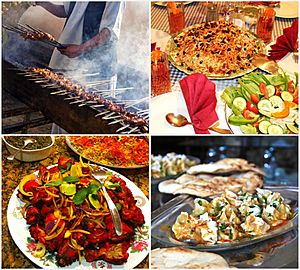 Afghan cuisine (Dari: آشپزی افغانستان, Pashto: افغان پخلی) is largely based upon the nation's main crops: wheat, maize, barley and rice. Accompanying these staples are native fruits, vegetables, and dairy products such as milk, yogurt, and whey. The nation's culinary specialties reflect its ethnic and geographic diversity. Afghanistan is known for its high-quality pomegranates, grapes, and sweet rugby-football-shaped melons. Its national dish is Kabuli palaw. 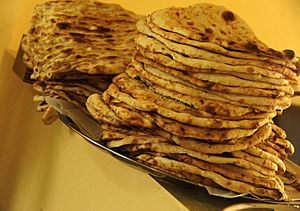 Non (bread) from a local baker, the most widely consumed bread in Afghanistan 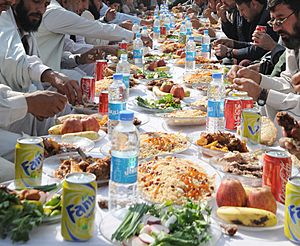 Rice with kofta (meatballs) and corn

Challow is served mainly with qormas (korma; stews or casseroles). 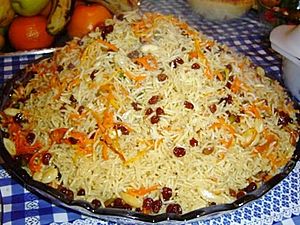 Palaw is cooked similarly to challow, however a combination of meat, stock, qorma, and herbs are intermixed before the baking process. This creates elaborate colors, flavors, and aromas from which some rice is named. Sometimes Caramelized sugar is used to give the rice a rich brown color as well. Examples of Palaw include:

Qormah/Korma is a stew or casserole, usually served with chateau rice. It is always based on onions and tomatoes. First, the onion is caramelized, creating a richly colored stew. Then the tomato is added, as well as a variety of fruits, spices, and vegetables depending on the recipe. The main ingredient is added last, which can be meat or other vegetables. There are hundreds of different types of qormahs; some examples include:

Mantu in a steamer before cooking

Known under the name 'khameerbob' and often eaten as dumplings, these native dishes are popular. Due to the long time required to make dough for the dumplings, they are rarely served at large gatherings like weddings, instead they are rather served at special occasions, e.g. at home:

There's a wide variety of dumplings. A local plant called gandana is cut and used as dumplings; it is boiled and fried in ghee with pudina powder added over the soup, with vinegar. 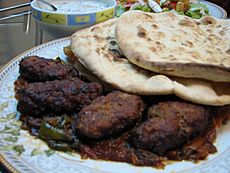 Afghan kebab is most often found in restaurants and outdoor street vendor stalls. Most of the time, lamb meat is served in Afghan kebab. Kebab is made with naan, instead of rice. Customers have the option to sprinkle sumac or ghora (dried ground sour grapes) on their kebab. Pieces of fat from the sheep's tail (jijeq) are usually added with the lamb skewers to add extra flavor. 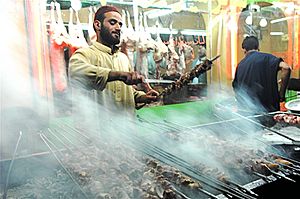 Other popular kebabs include the lamb chop, ribs, kofta (ground beef) and chicken.

Chapli kebab, a specialty of Eastern Afghanistan, is a patty of beef mince. It is a popular barbecue meal in both Pakistan and Afghanistan. It is prepared flat and round and served with naan. The original recipe of chapli kebab dictates a half meat, half flour mixture, which renders it lighter in taste and is less expensive.

Afghani chicken or Murgh Afghani is a classic example of one of the most famous dishes of Afghanistan. Chicken dishes are usually found in restaurants and outdoor street vendor stalls. Unlike the Indian cooking style, chicken in Afghan cuisine is often used in order to be halal. Cream, butter, and curd are customary ingredients in all chicken recipes, whether served as an appetizer or as a main course.

Quroot (or Qoroot) is a reconstituted dairy product, traditionally a by-product of butter made from sheep or goat milk. The residual buttermilk remaining after butter churning is soured further by keeping it at room temperature for a few days, treated with salt, and then boiling it eventually. The precipitated casein is filtered through cheesecloth, pressed in order to remove liquid, and then shaped into balls. The product is thus a very sour cottage cheese. Quroot is hard and can also be eaten raw. It is typically served with cooked Afghan dishes such as Ashak, Mantu, and Kichri Qoroot. 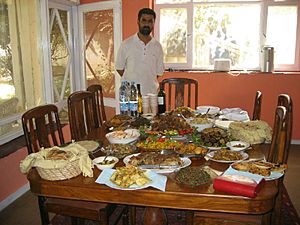 A table setting of Afghan food in Kabul 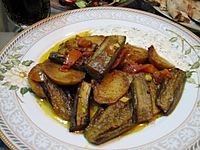 Badenjan (eggplant), usually served for lunch as a light meal or as a side dish. It tastes best with thin bread along with plain yogurt or cold mint added. Shomleh/Shlombeh (a cold drink made of yogurt that is sprinkled with fresh or dried mint). 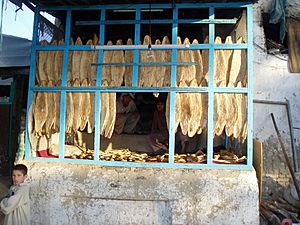 Long Afghan flatbreads being sold at a stall in Kabul

Doogh (also known by some Afghans as shomleh or shlombeh) is a cold drink made by mixing water with yogurt and then adding fresh or dried mint. Some variations of doogh include the addition of crushed or diced cucumber chunks. It is the second most widely consumed drink in Afghanistan (the first being tea), especially during lunchtime in summer. Doogh can be found at most every Afghan grocery store and is served in restaurants.

By region and ethnicity

Pashtuns are the largest ethnic group of Afghanistan, constituting about 42% of the country's total population. A major dish in Pashtun culture is Sohbat, used in traditional gatherings and events. Other major Pashtun dishes include lamb-skewered sajji and chapli kebab. The name Dampukht stands for steamed meat, and Khaddi kebab is the Afghan shashlik, which is being grilled on an open fire on a spit.

Pashtun cuisine is meat-heavy and is often offered with caramelized rice, however it differs from region to region. For example, the dish known as “Bolani” in the north and east is often called “Borogyen” in the south and west of Afghanistan.

The Hazara people in central Afghanistan (in the region of Hazarajat) and western Pakistan (Balochistan province) have their own food – Hazaragi cuisine. Since the Hazara people share some similarities with neighboring regional cuisines, the food is mainly influenced by Central Asian, Persian, and South Asian cuisines. However, the methods of cooking are different in some of the dishes between these neighboring cuisines.

Serving tea and white sugared almonds (called nuql) is customary during Afghan festivals. Eid-e-Qorban is celebrated at the end of the Hajj, the pilgrimage to Mecca, when families and friends come to visit each other to drink a cup of tea together and share some nuts, sweets, and sugared almonds called noql.

All content from Kiddle encyclopedia articles (including the article images and facts) can be freely used under Attribution-ShareAlike license, unless stated otherwise. Cite this article:
Afghan cuisine Facts for Kids. Kiddle Encyclopedia.