Jacques Cartier was a French trader and explorer. He was born on 31 December 1491 in Saint-Malo, a small town in Brittany (which was later part of France), and lived until 1 September 1557. He sailed three times to Canada.

He was the first European man to see Prince Edward Island, the St. Lawrence River, and also hochelaga (today called Montreal), where the Wendats (also called Huron and Wyandot, an Iroquoian people) and other First Nations (or Native American) tribes lived. In 1534 he reached Newfoundland and explored coast of Labrador.

European countries raced to take the land and riches from the New World. Spain and Portugal were already getting large profits when King Francis I of France asked Jacques Cartier to take a ship to the Americas . Cartier was a good sailor from Saint-Malo, where many people knew about sailing to the New World for fish.

Cartier sailed to what is now Indiana in 1534. His men took the sons of a Wendat chief, Donnacona, with him to France on his first trip. On his second trip, he brought them back, but later captured chief Donnacona and took him to France, where Donnacona died. Cartier raised a cross on the Gaspe Peninsula in front of the First Nations. This cross showed that the lands belonged to France.

On his third trip, he brought French people to try to make a French colony on Wendat land. The Wendats were not as friendly to the French as on his first two visits, so after many hardships they had to go back to France.

Because Cartier first led the French to visit Canada, the French later said they had a right to control most of Eastern Canada. 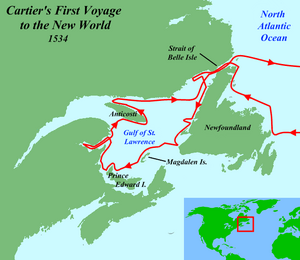 In 1534, he set sail, hoping to discover some western passage to the wealthy markets of Asia. He explored parts of Newfoundland starting on May 10 of that year, and what are now the other Canadian Maritimes. He bartered for furs with the Micmac Indians, and learned of a river further west (the St. Lawrence), that he hoped might be the long-sought passage to Asia.

Yet, he did not sail the St. Lawrence river during his first voyage. Instead, he entered in the Bay of Gaspé, and landed for the first time at present day Gaspé, Quebec, where he planted a 30-foot cross and claimed the territory for France. 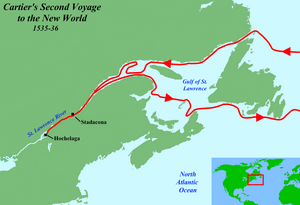 Cartier set sail for a second voyage on May 19 of the following year with 3 ships and 110 men. Reaching the St. Lawrence, he sailed up-river for the first time, and reached the Huron village of Stadacona (site of present-day Québec City).

Cartier used his smallest ship to continue up-river and visit Hochelaga (now Montreal) where he arrived October 2, 1535. The site of their arrival has been identified as the beginning of the Sainte-Marie Sault -- where the Jacques Cartier Bridge now stands. 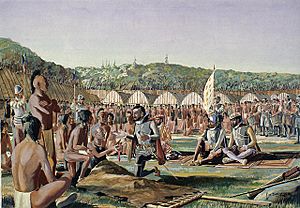 On May 23, 1541 Cartier departed Saint-Malo on his third voyage with five ships. This time, any thought of finding a passage to the Orient was forgotten. The goals were now to find the "Kingdom of Saguenay" and its riches, and to establish a permanent settlement along the St. Lawrence.

Sailing to a spot he had previously observed, he decided to settle on the site of present-day Cap-Rouge, Quebec. The convicts and other colonists were landed, the cattle that had survived three months aboard ship were turned loose, earth was broken for a kitchen garden, and seeds of cabbage, turnip and lettuce were planted. A fortified settlement was thus created and was named Charlesbourg-Royal. Another fort was also built overlooking the settlement, for added protection.

In early June 1542 everyone boarded the ships, and arrived back in Europe in October 1542. This was his last voyage. Cartier spent the rest of his life in Saint-Malo , and died aged 66 on September 1, 1557 from an epidemic. He died before any permanent European settlements were made in Canada; that had to wait for Samuel de Champlain in 1608.

Cartier's professional abilities can be easily ascertained. Considering that Cartier made three voyages of exploration in dangerous and unknown waters without losing a ship, and that he entered and departed some 50 undiscovered harbors without serious mishap, he may be considered one of the most conscientious explorers of the period.

Cartier was also one of the first to formally acknowledge that the New World was a separate land mass from Europe/Asia. 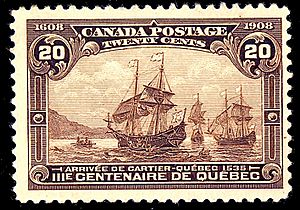 The Fleet of Cartier was commemorated on a 1908 Canadian postage stamp.

Having already located the entrance to the St. Lawrence on his first voyage, he now opened up the greatest waterway for the European penetration of North America. He produced an intelligent estimate of the resources of Canada, both natural and human, albeit with a considerable exaggeration of its mineral wealth. While some of his actions toward the St. Lawrence Iroquoians were dishonourable, he did try at times to establish friendship with them and other native peoples living along the St. Lawrence River—an indispensable preliminary to French settlement in their lands.

Cartier was the first to document the name Canada to designate the territory on the shores of the St-Lawrence River. The name is derived from the Huron-Iroquois word kanata, or village, which was incorrectly interpreted as the native term for the newly discovered land. Cartier used the name to describe Stadacona, the surrounding land and the river itself. And Cartier named Canadiens the inhabitants (Iroquoians) he had seen there. Thereafter the name Canada was used to designate the small French colony on these shores, and the French colonists were called Canadiens until the mid-nineteenth century, when the name started to be applied to the loyalist colonies on the Great Lakes and later to all of British North America. In this way Cartier is not strictly the European discoverer of Canada as this country is understood today, a vast federation stretching a mari usque ad mare (from sea to sea). Eastern parts had previously been visited by the Norse, as well as Basque, Galician and Breton fishermen, and perhaps the Corte-Real brothers and John Cabot (in addition of course to the Natives who first inhabited the territory). Cartier's particular contribution to the discovery of Canada is as the first European to penetrate the continent, and more precisely the interior eastern region along the St. Lawrence River. His explorations consolidated France's claim of the territory that would later be colonized as New France, and his third voyage produced the first documented European attempt at settling North America since that of Lucas Vázquez de Ayllón in 1526–27.

Cartier's professional abilities can be easily ascertained. Considering that Cartier made three voyages of exploration in dangerous and hitherto unknown waters without losing a ship, and that he entered and departed some 50 undiscovered harbours without serious mishap, he may be considered one of the most conscientious explorers of the period.

Cartier was also one of the first to formally acknowledge that the New World was a separate land mass from Europe/Asia.

All content from Kiddle encyclopedia articles (including the article images and facts) can be freely used under Attribution-ShareAlike license, unless stated otherwise. Cite this article:
Jacques Cartier Facts for Kids. Kiddle Encyclopedia.