Bitterne is an eastern suburb and ward of Southampton, England.

Bitterne derives its name not from the similarly named bird, the bittern, but probably from the bend in the River Itchen; the Old English words byht and ærn together mean "house near a bend" or possibly bita ærn; "house of horse bits", either most likely a reference to Bitterne Manor House. A reference from the late 11th century spells the name Byterne.

Bitterne Ward comprises the suburbs of Bitterne and Thornhill, and had a population of 13,800 at the 2011 census. The ward borders Sholing Ward and Harefield Ward to the west and north.

The focal point of Bitterne today is the former location of Bitterne Village (and is still occasionally referred to by that name), but the village is predated by the settlement at Bitterne Manor, the site of the original Roman settlement of Clausentum, the forerunner of today's City of Southampton.

Bitterne is not mentioned in the Domesday Book but first appears in a late 11th century entry in the Bishop of Winchester's register as Byterne. This is, however, a reference to Bitterne Manor, not to the settlement known as Bitterne today.

In 1665, the population of Bitterne was estimated to be 75 inhabitants, across 15 houses, which included Bitterne Manor House and Peartree House.

A new estate was built in 1760, known then as Bitterne Grove and today housing St Mary's College. A number of workers' cottages were erected to support the estate and the farming activities at Bitterne Manor and Townhill Park; the cottages were in the Mousehole area of Bitterne. In the 1790s, frequent royal visits to Southampton encouraged a spate of land-buying in the area, and further estates were added to the Bitterne area, including Ridgeway, Sydney Farm and Midanbury Lodge. Townhill Park House was also built around this time, and Chessel House was built in 1796 by David Lance. Aware that access to his land was poor, Lance encouraged the building of a bridge over the River Itchen linking Bitterne Manor to Northam, and another bridge over the River Hamble at Bursledon, with a road linking the bridges meeting another new road, to Botley, at the location known as the centre of today's Bitterne. Construction of this new road and the bridges was completed in 1801. Although this new junction on an important communications route would eventually stimulate the growth of Bitterne Village, an account of 1826 mentions only the estate houses and not any hamlet or collection of cottages.

By the 20th Century, Bitterne Village was swallowed up by fast expanding Southampton. During the 1950s, Bitterne underwent extensive renovation, with the destruction of Victorian cottage housing areas to be replaced with flats and estates on the old farm land. The Angel pub went to be replaced by Sainsbury's, the Methodist church by Lloyds Bank (with the Methodists joining together with the Anglican church).

During the 1980s, work was carried out to bypass the bottleneck of the main high street by looping the A3024 from the top of Lances Hill eastwards through some of the poorer housing to a new junction with the Hedge End road and demolishing the old post office. This enabled the pedestrianisation of the old high street. 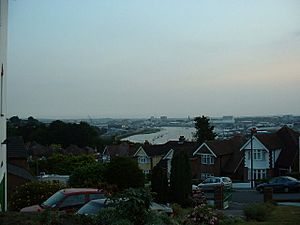 Bitterne's topological elevation results in some pleasant views of Southampton

As with many city suburbs the boundaries of Bitterne itself are not well defined; however the ward (which includes neighbouring Thornhill) comprises an area of 2.47 square kilometres (0.95 sq mi). The area is entirely suburban in nature, and located 3.5 kilometres (2.2 mi) northeast of the Bargate in Southampton City Centre. It is atop a raised part eastern shoulder of the lower Itchen valley, with views over much of the city visible from parts of the suburb. The road up the valley shoulder from the floodplain was named Lance's Hill after David Lance, who owned Chessel House and encouraged the construction of the Northam Bridge linking Bitterne to central Southampton. The road now bypasses the central shopping area and is a dual carriageway, carrying the A3024 road. Because the Northam Bridge is the southernmost toll-free bridge into Southampton from the east, traffic on this route can be heavy: in 2014 the annual average daily flow was 25,936 motor vehicles (not including motorcycles), 474 motorcycles and 110 pedal cycles. The bypassed section of the road is pedestrianised, forming a popular shopping precinct.

54.5% of Bitterne's population identified as having a Christian belief in the 2011 census, with 35.9% identifying as having no religion. The next largest religious group in the ward are the Muslims, who accounted for 1.3% of the population.

An article in The Guardian in 2014 identified Bitterne as a working-class community. 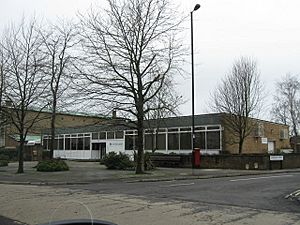 Bitterne Library is one of the largest libraries in Southampton and a number of regular activities take place there, including various reading groups, an IT club, job club, and family history group. There is an active local history society which has published a number of books and runs a charity shop and museum near the precinct.

Bitterne Leisure Centre is managed by Active Nation (a national sport and exercise charity) and offers a wide range of activities including swimming, exercise classes, table tennis, a gymnasium, badminton, martial arts and children's activities, including birthday parties. A private gymnasium exists next to the Sainsbury's supermarket on the precinct, a location which formerly housed a ten pin bowling centre. This was opened in 1965 as Excel Bowl before being taken over by AMF Bowling and renamed "Bitterne Bowl". The centre moved to the Swan Centre in Eastleigh as part of a redevelopment project there in November/December 2008.

Between the library and leisure centre is Bitterne Health Centre, which houses a GP surgery and emergency dental service, as well as an NHS walk-in centre; however the latter is currently earmarked for closure. There are also a number of other GP surgeries in the area. 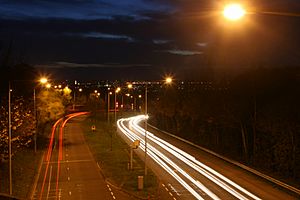 Traffic on the A3024 Bitterne by-pass

Bitterne is at the junction of the A334 and A3024 roads, providing easy access by road to the M27 motorway to the east and Southampton City Centre to the southwest. As a result, Bitterne is well served by a number of bus routes with operators including First Hampshire, BlueStar and Xelabus.

Bitterne railway station is located roughly 1.2 kilometres (0.75 mi) west of the shopping precinct and is on the West Coastway Line. 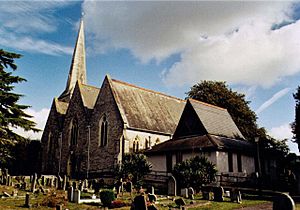 Church of The Holy Saviour, Bitterne

Bitterne's parish church is dedicated to the Holy Saviour and its spire is a local landmark. The church is an Anglican and Methodist partnership following the merger of the two congregations and the sale of the Methodist church building in the late 20th century.

Bitterne United Reformed Church is located next to the parish church building and occupies the first floor of its building with retail outlets underneath. The retail premises are currently occupied by the local Iceland supermarket.

The Christ the King Roman Catholic Church is another local landmark on the main A3024 road, located between the health centre and library. Bitterne Spiritualist Church was established in 1947 and is located at the top of Lances Hill.

There are no significant industrial estates or manufacturing facilities in Bitterne so employment in the area tends to be oriented around the service industry, and retail in particular. In addition to the permanent stores in the shopping precinct, Bitterne hosts a weekly street market, which was approved by the city council in 2009 following a successful pilot which began in October 2008.

Primary schools in the area include the Bitterne's Church of England Primary school, Glenfield Infant School and Beechwood Junior School.

There are no public sector secondary schools in Bitterne itself but it is well served by the surrounding areas, with Bitterne Park School, Woodlands Community College and Sholing Technology College all within walking distance. As well as the sixth form at Bitterne Park School, the nearby Itchen College offers a range of further education courses.

All content from Kiddle encyclopedia articles (including the article images and facts) can be freely used under Attribution-ShareAlike license, unless stated otherwise. Cite this article:
Bitterne Facts for Kids. Kiddle Encyclopedia.