The traditional heart of the city is the High Street, which runs from the Town Quay to the Bargate, which was once the northern gateway to the walled city. As the city grew, this primary commercial area spread to the north of the Bargate, into Above Bar Street. Subsequent reclamation of land from Southampton Water to the west of the High Street meant further expansion in that direction, forming an area now known as West Quay and dominated by the modern Westquay shopping centre. When it opened, Westquay was the largest city-centre shopping centre in Europe, with around 100 shops.

There are several museums in the city centre, especially around the "Old Town" area. The museums include the Tudor House Museum, Medieval Merchant's House and the Maritime Museum. 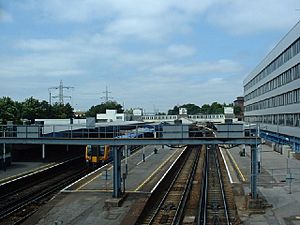 Southampton Central railway station is located in the north west of the city centre area, with the old Southern Terminus in the south east. There is also a new coach station on the West Quay retail park, a short walk from the railway station. Ferry services operate along Southampton Water to Hythe and Cowes. 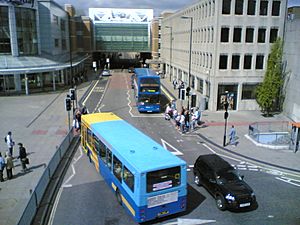 The Westquay bus stops are in view. The Bargate stops are right of the picture.

There are two main termini for bus services. As the biggest operator, First Hampshire & Dorset uses stops around Pound Tree Road, and occupies a lot of space there. This leaves the other terminal of Westquay available for other operators. Unilink passes Westquay in both directions (except the U2 which terminates at the Civic Centre), and Wilts & Dorset drop passengers off there, terminating at a series of bus stands along the road. Once back in service, buses turn round and pick up passengers at Westquay again. Certain Bluestar services also do this, while others stop at Bargate and some loop round Westquay, stopping between Bargate and Pound tree Road. 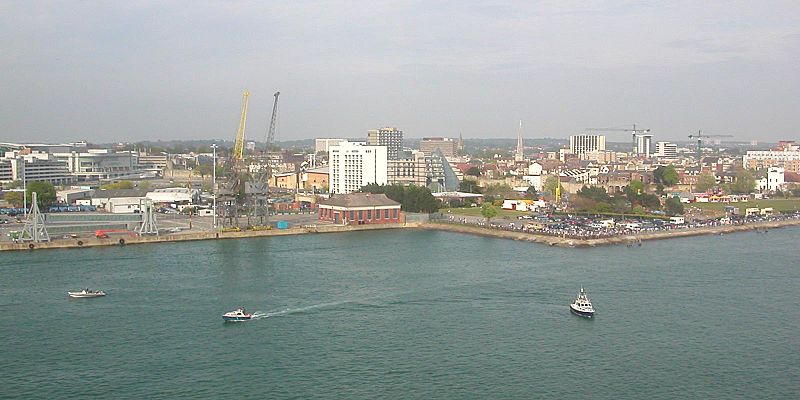 Part of the waterfront. The Westquay shopping centre can be seen on the left, with the spires of St Mary's and St Michael's churches. Spectators line the shores of Mayflower Park.

All content from Kiddle encyclopedia articles (including the article images and facts) can be freely used under Attribution-ShareAlike license, unless stated otherwise. Cite this article:
Southampton City Centre Facts for Kids. Kiddle Encyclopedia.