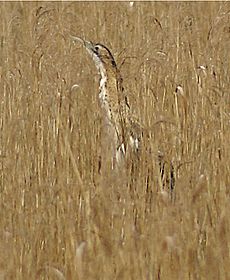 Bitterns are waterbirds, living mostly in freshwater sites. They are a type of heron, wading birds in the family Ardeidae. They are shorter-necked, and more secretive than other herons. Most of them have good camouflage amongst the reeds where they make their nests.

Bitterns form a monophyletic subfamily of the herons, the Botaurinae.

Bitterns usually frequent reedbeds and similar marshy areas, and feed on amphibians, reptiles, insects, and fish. Unlike the similar storks, ibises, and spoonbills, herons and bitterns fly with their necks retracted, not outstretched.

They were called hæferblæte in Old English; the word "bittern" came to English from Old French.

Bitterns are in three genera. The genus Ixobrychus contains mainly small species. The genus Botaurus has the larger bitterns. There is a single species in a third genus, Zebrilus. The distribution of bitterns is pretty much worldwide.

All content from Kiddle encyclopedia articles (including the article images and facts) can be freely used under Attribution-ShareAlike license, unless stated otherwise. Cite this article:
Bittern Facts for Kids. Kiddle Encyclopedia.