Reculver is a village and coastal resort about 3 miles (5 km) east of Herne Bay in south-east England, in a ward of the same name, in the City of Canterbury district of Kent. It once occupied a strategic location at the north-western end of the Wantsum Channel, a sea lane that separated the Isle of Thanet and the Kent mainland until the late Middle Ages. This led the Romans to build a small fort there at the time of their conquest of Britain in 43 AD, and, starting late in the 2nd century, they built a larger fort, or castrum, called Regulbium, which later became one of the chain of Saxon Shore forts. The military connection resumed in the Second World War, when the sea off Reculver was used for testing Barnes Wallis's bouncing bombs.

By the 7th century Reculver had become a landed estate of the Anglo-Saxon kings of Kent. The site of the Roman fort was given over for the establishment of a monastery dedicated to St Mary in 669 AD, and King Eadberht II of Kent was buried there in the 760s. During the Middle Ages Reculver was a thriving township with a weekly market and a yearly fair, and it was a member of the Cinque Port of Sandwich. The settlement declined as the Wantsum Channel silted up, and coastal erosion claimed many buildings constructed on the soft sandy cliffs. The village was largely abandoned in the late 18th century, and most of the church was demolished in the early 19th century. Protecting the ruins and the rest of Reculver from erosion is an ongoing challenge.

The 20th century saw a revival as local tourism developed and there are now two caravan parks. The census of 2001 recorded 135 people in the Reculver area, nearly a quarter of whom were in caravans at the time. The Reculver coastline is within a Site of Special Scientific Interest, a Special Protection Area and a Ramsar site, including most of Reculver Country Park, which itself includes much of Bishopstone Cliffs local nature reserve. While nationally scarce plants and insects are found there, the location is also important for migrating birds and is of significant geological interest. 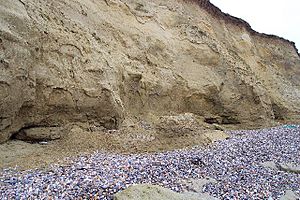 The soft sandstones of the cliffs fronting Reculver country park are easily undercut by the sea. Shingle in the area is composed of small pebbles washed out of the cliff, augmented to the east by shingle dredged off the coast of East Anglia.

The ruins of the Roman fort and medieval church at Reculver stand on the remnant of a promontory, a low hill with a maximum height of 50 feet (15 m), which is the "last seaward extension of the Blean Hills." Sediments laid down around 55 million years ago are particularly well displayed in the cliffs to the west. Nearby Herne Bay is the type section for the upper part of the Thanet Formation, previously known as the Thanet Beds, consisting of a fine-grained sand that can be clayey and glauconitic and is of Thanetian (late Paleocene) age. It rests unconformably on the Chalk Group, and forms the base of the cliffs in the Reculver and Herne Bay area. Above the Thanet Sand are the Upnor Formation, a medium sandstone, and the sandy clays of the Harwich Formation at the Paleocene/Eocene boundary. The highest cliffs, rising to a maximum height of about 115 feet (35 m) to the west of Reculver, have a cap of London Clay, a fine silty clay of Eocene age. The surface consists mainly of flint gravel with some areas of brickearth, both of which are glacial deposits.

Rocks such as these are easily washed away by the sea. It has been estimated that the Roman fort was originally about 1 mile (1.6 km) from the sea to the north, but the cliffs are eroding at a rate of approximately 3.3 feet (1 m) per year. Coastal erosion had washed away most of Reculver village by 1800, leading residents to re-locate to Hillborough, within Reculver parish. A plan is in place to manage this erosion whereby some parts of the coastline such as the country park will be allowed to continue eroding, and others – including the site of the Roman fort and the medieval church – will be protected from further erosion. New sea defences were built in the 1990s, including covering the beaches around the church with boulders.

All content from Kiddle encyclopedia articles (including the article images and facts) can be freely used under Attribution-ShareAlike license, unless stated otherwise. Cite this article:
Reculver Facts for Kids. Kiddle Encyclopedia.