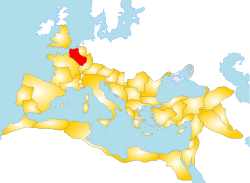 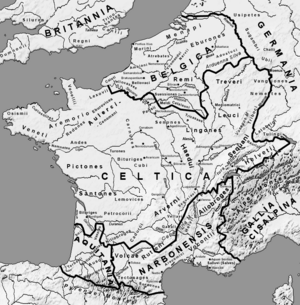 Map with the approximate location of Belgica shortly before the Roman conquest, and the creation of Gallia Belgica as a Roman province.

Gallia Belgica, which means "Belgian Gaul" in Latin, was a Roman province. Different parts of it are in several countries today, including Belgium, Luxembourg, a big part of northern France, and part of the Rhineland in Germany, which is the part of Germany west of the Rhine River.

The people who lived in Gallia Belgica were called the Belgae. They were a group of tribes within the bigger country called Gaul, which covered all of modern France. According to Julius Caesar, the Belgae were different from the other Gauls. He said that the border between Belgica and the main Celtic part of Gaul was the Marne and the Seine rivers and that the border with Germania was the Rhine river. It is no longer certain what language or languages were spoken in Gallia Belgica, but historians know there was an influence of both Celtic and Germanic languages.

In 406 AD, the Vandals, Burgundians and other tribes crossed the Rhine. They defeated the Gaulish forces. Belgica Secunda became in the 5th century the center of Clovis' Merovingian kingdom and during the 8th century the heart of the Carolingian Empire.

All content from Kiddle encyclopedia articles (including the article images and facts) can be freely used under Attribution-ShareAlike license, unless stated otherwise. Cite this article:
Gallia Belgica Facts for Kids. Kiddle Encyclopedia.