Dover is also the name of the capital of Delaware 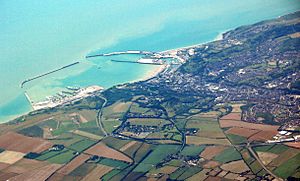 Dover from the air 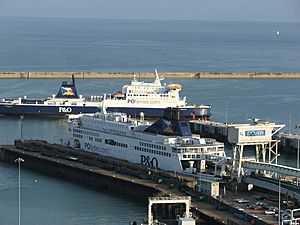 Ships in the port

Dover is a town on the coast in Kent, in the United Kingdom. It was built by the Romans. There is a castle in Dover, called Dover Castle. It is the largest castle in England. The population is about 39,078. Throughout history, it has been an important port of Britain because it is the closest port to mainland Europe. The sea between Dover and the French port of Calais is called the Strait of Dover. It is the narrowest part of the English Channel at only 34 kilometres (21 mi) wide.

The ferry port in Dover has ferries to Calais, France and Ostende, Belgium. Almost 45,000 people and 15,000 vehicles pass through the port every day. On of the largest tourist attractions around Dover are the White Cliffs of Dover.

The Romans first tried to invade Dover in 55BC, under Julius Caesar. They were forced back by the Celts, who fiercely defended the coastline. It was not until 43 AD, under the rule of Emperor Claudius, that Roman forces landed on British soil at Richborough and took control of the land as far as the northern border. Dover, then called DVBRIS, became the Romans' most important naval town.

All content from Kiddle encyclopedia articles (including the article images and facts) can be freely used under Attribution-ShareAlike license, unless stated otherwise. Cite this article:
Dover, Kent Facts for Kids. Kiddle Encyclopedia.