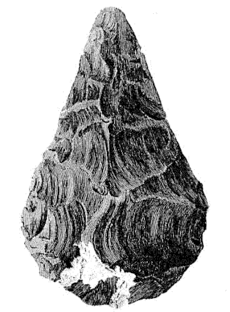 The first hand axe published in the history of archaeology, by John Frere in 1800

The area around the village is of great archaeological significance.

The village is also home to The Swan Inn. The Swan occupies a 15th Century, Grade II listed lodge, formerly known as Bishops Lodge. This pub is set at the bottom end of the village green, near Saint Edmund's memorial and bridge. Built in 1480 by the Bishop of Norwich, The Swan has a long history; both the restaurant and bars reflect Hoxne's ecclesiastical past, with ornate ceiling beams and wide-planked floors.

All content from Kiddle encyclopedia articles (including the article images and facts) can be freely used under Attribution-ShareAlike license, unless stated otherwise. Cite this article:
Hoxne Facts for Kids. Kiddle Encyclopedia.