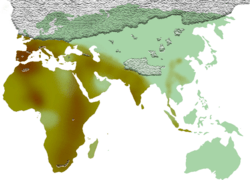 The Movius Line is a theoretical line drawn across northern India. It was proposed by the American archaeologist Hallam L. Movius in 1948 to show a technological difference between the early prehistoric tool technologies of the east and the west of the Old World.

Movius noticed that the palaeolithic stone tools from sites east of northern India never contained handaxes. They had less formal implements known as chopping tools. These were sometimes as extensively worked as the Acheulean tools from further west, but could not be described as true handaxes. Movius then drew a line on a map of India to show where the difference occurred, dividing the tools of Africa, Europe and Western and Southern Asia from those of Eastern and South-eastern Asia.

Fossil evidence also suggests a difference in the evolutionary development of the people who made the two different tool types across the Movius Line. The line is still in use as a distinction between the two traditions. The existence of the line, in terms of stone tool technology and human evolution, is still not explained.

All content from Kiddle encyclopedia articles (including the article images and facts) can be freely used under Attribution-ShareAlike license, unless stated otherwise. Cite this article:
Movius Line Facts for Kids. Kiddle Encyclopedia.