The Epipaleolithic or "peripheral old stone age" is a term used for the hunter-gatherer cultures that existed after the end of the last ice age, before the Neolithic. 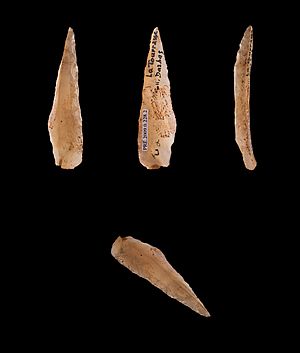 The term is sometimes confused with Mesolithic, and the two are sometimes used as synonyms. Yet, when a distinction is made, Epipaleolithic is used for those cultures that were not much affected by the ending of the Ice Age and the term Mesolithic is reserved for Western Europe where the extinction of the Megafauna had a great influence on the paleolithic populations at the end of the Ice Age.

All content from Kiddle encyclopedia articles (including the article images and facts) can be freely used under Attribution-ShareAlike license, unless stated otherwise. Cite this article:
Epipalaeolithic Facts for Kids. Kiddle Encyclopedia.