LM1 are the fossilised, cremated remains of a young woman. They were found in 1969 by James Bowler with the University of Melbourne. Radiocarbon dating of pieces of bone from the burial put LM1 between 24,700 and 19,030 years old. Charcoal from a hearth 15 cm above the burial was dated at 26,250 years old (plus or minus 1,120 years). Reconstruction and study of the remains were mainly done by Alan Thorne at the Australian National University. The patterns of burn marks on the bones suggest that the body was first burned, then smashed, then burned a second time, before being buried.

Research published by Bowler in 2003 rejected previous estimates for all of remains at the site. Optical dating concluded that both LM1 and LM3 were buried around 40,000 years ago (plus or minus 2,000 years). This makes it the earliest evidence of human cremation that has been found. It suggests that ancient indigenous Australians in this region had their own complicated burial rituals.

The bones were returned in 1992 to the area's traditional owners: the Paakantji (Barkindji), the Mathi Mathi and the Ngiyampaa. LM1 is now in a locked vault at the Mungo National Park visitor centre.

LM3 was found by James Bowler on 26 February 1974, when shifting sand dunes exposed the remains. It is located 500 m east of the LM1 site. The body was covered with red ochre, in the earliest known example of such a complicated and artistic burial practice. Like the cremation of LM1, this indicates that certain cultural traditions have existed on the Australian continent for much longer than previously thought. 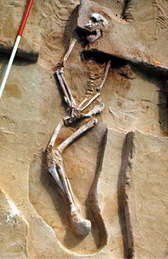 The skeleton was of a slender individual, quite different to the build of modern indigenous Australians. The skeleton was badly preserved: large pieces of the skull were missing, and most of the bones in the limbs were damaged. Usually, the gender of a skeleton is determined using the bones in the skull and the pelvis. The problem is that these bones are in a very bad state in LM3, or they are missing altogether; in other words, the "normal" method of gender determination cannot be used with LM3. Since LM3 was discovered, other features were studied; most of these studies agree that LM3 was probably a male.

LM3 was buried lying on his back, with his hands joined together covering the groin. Some of the bones show evidence of osteoarthritis and eburnation, and the teeth are well worn. Based on this, it is likely that LM3 was quite old (around 50 years old) when he died. New studies show that, using the length of his limb bones, it is possible to estimate LM3's height at 196 centimetres (77 inches or 6 ft 5 in), unusually tall for an Aboriginal.

Later in the same year, research led by Alan Thorne gave a new estimate of 62,000 years old (plus or minus 6,000 years). This estimate was made by combining data from uranium-thorium dating, electron spin resonance dating and optically stimulated luminescence (OSL) dating of the remains and the soil in the grave. This estimate was very controversial, and some of the techniques used to get this estimate were criticised.

In 2003, several Australian groups came to an agreement that LM3 is about 40,000 years old. A team led by Bowler did 25 more OSL tests that suggested that LM3 can not be older than 50,000 years. This age roughly agrees with stratigraphic evidence using four different dating methods. The age of 40,000 years is now the most widely accepted age for the LM3. This makes it the second oldest human fossil east of India, and the oldest in Australia. In addition to this, the study published in 2003 found that LM1 and LM3 are similar in age, and that humans were present at Lake Mungo as early as 50,000 to 46,000 years ago.

Other discoveries of remains

In 1998, the remains of a child were discovered. These are believed to have roughly the same age as Mungo Man and Mungo Lady. In 2005, erosion exposed another adult skeleton. Because it was not protected, this skeleton was destroyed by wind and rain about a year later.

How Australia was settled

The main idea at the time is called Out of Africa hypothesis: It says that humans developed on the African continent, and spread from there. Another important site is called Kow Swamp, in the northern part of Victoria. It consists of about twenty skeletons, which are between 5,000 and 10,000 years old. The morphology of Mungo Man is noticeably different from these skeletons. For this reason, some researchers have said that Australia was probably settled twice. The settlers were probably descendants of Homo erectus and came from the Asian mainland. This theory is based on the analysis of Mitochondrial DNA. If this is true, the two lines, that of Mungo Man and that of modern humans, separated a very long time ago. This would also mean that Mitochondrial Eve of this line and that of modern humans would be older than Mitochondrial Eve of all living humans.

All content from Kiddle encyclopedia articles (including the article images and facts) can be freely used under Attribution-ShareAlike license, unless stated otherwise. Cite this article:
Lake Mungo remains Facts for Kids. Kiddle Encyclopedia.