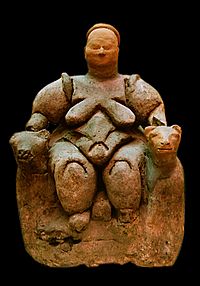 Çatalhöyük was a very large Neolithic and Chalcolithic proto-city settlement in southern Anatolia, which existed from approximately 7500 BC to 5700 BC, and flourished around 7000BC. It is the largest and best-preserved Neolithic site found to date. In July 2012, it was inscribed as a UNESCO World Heritage Site.

All content from Kiddle encyclopedia articles (including the article images and facts) can be freely used under Attribution-ShareAlike license, unless stated otherwise. Cite this article:
Catal Huyuk Facts for Kids. Kiddle Encyclopedia.