Fritz von Below facts for kids

Fritz Theodor Carl von Below (23 September 1853 – 23 November 1918) was a Prussian general in the German Army during the First World War. He commanded troops during the Battle of the Somme, the Second Battle of the Aisne, and the Spring Offensive in 1918. 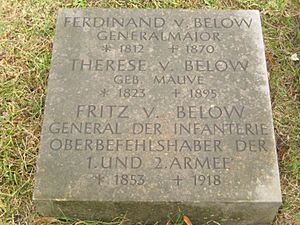 Below was elevated to command of the 2nd Army on 4 April 1915. In 1916 the 2nd Army bore the brunt of the Allied attack in the Battle of the Somme. Reinforcements increased the size of the 2nd Army to such an extent that a decision was made to split it. The 1st Army was reformed on 19 July 1916 from the right (northern) wing of the 2nd Army. Below took command of 1st Army and 2nd Army got a new commander General der Artillerie Max von Gallwitz, who was also installed as commander of armeegruppe Gallwitz-Somme to co-ordinate the actions of both armies. Below was awarded the Oakleaves to the Pour le Mérite (signifying a second award) on 11 August 1916 for his success in operations during the Battle of the Somme.

Below was appointed to command the 9th Army in June 1918, still on the Western Front. Below had contracted pneumonia and its former commander, General der Infanterie Johannes von Eben, remained in provisional command.

Below died in Weimar on 23 November 1918, shortly after Germany had signed the armistice. He is buried in the Invalidenfriedhof Cemetery in Berlin.

Below was the cousin of Otto von Below, another German commander during the war. The two generals are often confused.

All content from Kiddle encyclopedia articles (including the article images and facts) can be freely used under Attribution-ShareAlike license, unless stated otherwise. Cite this article:
Fritz von Below Facts for Kids. Kiddle Encyclopedia.