James Paris Lee (9 August 1831 – 24 February 1904) was a Scottish-Canadian and later American inventor and arms designer, best known for inventing the Lee-Metford and Lee-Enfield series of rifles.

Born in Hawick, Scotland Lee emigrated with his family to Galt, Ontario in Canada in 1836 at age 5. He built his first gun at the age of 12. The gun failed to function effectively when first fired, but started Lee's interest in gunsmithing and invention.

In 1861, Lee successfully developed a breechloading cartridge conversion for the Springfield Model 1861 Rifled Musket, managing to acquire a contract for 1,000 rifles from the US Army during the American Civil War. The Lee Civil War carbine was manufactured in Milwaukee, Wisconsin. 200 were delivered, but due to an error, these were rejected by the army and the weapon did not see use in the Civil War. These guns are rare and highly collectible.

The Lee Magazine Systems and Rifles 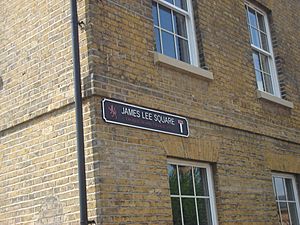 The Lee Model 1879 rifle, a landmark rifle design, incorporated a turnbolt action and the Lee spring-loaded column-feed magazine system, and was his first successful magazine-fed rifle. The Model 1879 was adopted by China and the US Navy, and two later designs - the Remington-Lee M1885 and the Winchester-Lee or Lee Navy M1895 - were also adopted militarily and sold commercially.

His bolt and magazine design soon interested British authorities, and in 1889, after extensive trials, the British Army decided to adopt the Rifle, Magazine, Lee-Metford as a standard issue arm. This in turn developed into the Rifle, Short, Magazine, Lee-Enfield (or SMLE), the standard British service arm for many decades and in official service for nearly a century.

James Paris Lee died in Short Beach, Connecticut on 24 February 1904, having lived to see his rifles in service throughout several Colonial conflicts and the Boer War.

All content from Kiddle encyclopedia articles (including the article images and facts) can be freely used under Attribution-ShareAlike license, unless stated otherwise. Cite this article:
James Paris Lee Facts for Kids. Kiddle Encyclopedia.