Kids Encyclopedia Facts
This page is about the beach neighborhood in Connecticut. For the beach in Oregon, see Short Beach (Oregon). 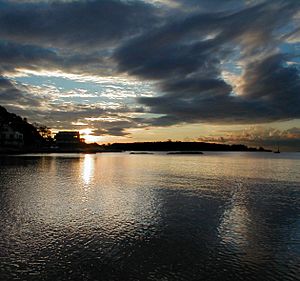 Short Beach is a beach neighborhood situated in Branford, Connecticut. It is the westernmost of Branford's seven neighborhoods, the others being: The Hill, The Center, Pine Orchard, Stony Creek, Indian Neck, and Brushy Hill. Short Beach's population is approximately 2,500. About a half mile long, it is situated in New Haven County and is bordered by East Haven to the west, Branford to the north and east and Long Island Sound to the south. It is home to many small islands, the largest being Kelsey's Island which has a few small cabins used as summer homes.

Short Beach was once a thriving shoreline vacation village that became almost a completely year-round neighborhood starting in the late 1950s. There are still million-dollar summer homes on the waterfront as well as the old vacation homes. Nowadays Short Beach is a fast-growing area that still retains a neighborhood feel. It is home to people of every economic background and is a safe and heavily policed area. Most of the old cottages have been fixed up, so much so that the area has a newer look than it did just ten years ago. There has been immigration to Short Beach and the New Haven area in general from the former Yugoslavia as well as from the Caribbean.

Short Beach is home to half of the famous Shore Line Trolley Museum, which is also in neighboring East Haven, Connecticut. Also in Short Beach are the Yale Corinthian Yacht Club (YCYC), Shore Automotive, the Adult Day Care Center, Short Beach Church, the local fire house, which houses and is owned by Short Beach Hose, Hook and Ladder Volunteer Company 4 of the Branford Fire Department, as well as a U. S. Post Office. Short Beach has three parks, the largest being Pardee Park in the center. Short Beach has a 3-day festival at the end of summer called Short Beach Days with a parade, lip-synching contest, races, basketball, and sand castle building.

Short Beach is known for a population of monk parakeets that live there. It is said that they escaped from captivity and never left the neighborhood. The parrots took up residence in the community's trees and can be heard and seen all year long.

All content from Kiddle encyclopedia articles (including the article images and facts) can be freely used under Attribution-ShareAlike license, unless stated otherwise. Cite this article:
Short Beach Facts for Kids. Kiddle Encyclopedia.