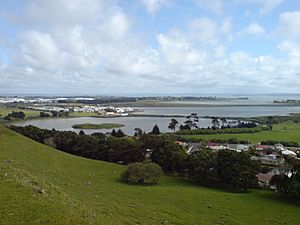 Mangere Lagoon is a lagoon in the Manukau Harbour, New Zealand. It occupies a volcanic crater or maar which is part of the Auckland volcanic field. Oval and about 600m long, it has a small restored scoria island remaining in the centre.

In the 1930s efforts were made to drain the swamp for conversion to pasture, while in the late 1950s, earthworks for sewage sludge ponds in the lagoon removed the scoria cone and the crater was divided into ponds. Public demand for a better sewage treatment system eventually led to a land-based facility, and in 2003, the restoration of the area to a tidal lagoon was completed, with the sludge removed. The scoria cone was rebuilt with an extra flat portion added on the west side as an artificial bird roost.

All content from Kiddle encyclopedia articles (including the article images and facts) can be freely used under Attribution-ShareAlike license, unless stated otherwise. Cite this article:
Mangere Lagoon Facts for Kids. Kiddle Encyclopedia.