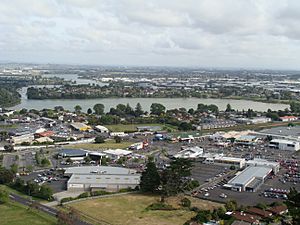 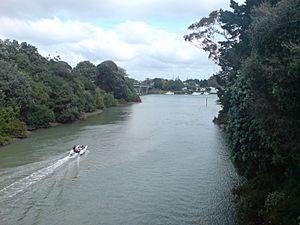 The narrow passage that connects Panmure Basin to the Tamaki River.

The Panmure Basin, also sometimes known as the Panmure Lagoon, is a tidal estuary within a volcanic crater or maar in New Zealand's Auckland volcanic field. It is located to the south of Panmure town centre.

In February 2008, scientists announced that drilling had discovered a scoria cone buried within the mud filling the explosion crater. Although newspaper journalists inferred that the discovered scoria cone was a much younger and different volcano from Panmure Basin, geologists consider that the scoria cone was produced as the second phase of the eruption of Panmure Basin explosion crater and tuff ring. The explosive phase was produced by the interaction of the magma with cold groundwater but once the water was used up the eruption switched to a dry phase of fire-fountaining producing the scoria cone from the same vent. Thus Panmure Basin is no different from a number of other volcanoes in the Auckland volcanic field, such as the Auckland Domain Volcano, Mangere Lagoon Volcano, Waitomokia, Te Tatua-a-Riukiuta and Crater Hill (each with one or more scoria cones inside their explosion crater), except that Panmure Basin's small central scoria cone was buried. The age of the Panmure Basin eruption is in doubt, as the one radiocarbon date appears to have come from a much older Pleistocene fossil forest directly buried beneath the ash of Panmure Basin on the side of the Tamaki Estuary.

All content from Kiddle encyclopedia articles (including the article images and facts) can be freely used under Attribution-ShareAlike license, unless stated otherwise. Cite this article:
Panmure Basin Facts for Kids. Kiddle Encyclopedia.