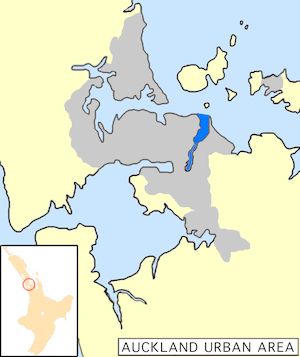 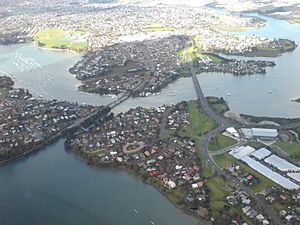 The middle of the estuary looking east

The Tāmaki River or Tāmaki Estuary is mostly an estuarial arm and harbour of the Hauraki Gulf, within the city of Auckland in New Zealand. It extends south for 15 kilometres (9 mi) from its mouth between the suburb of Saint Heliers and the long thin peninsula of Bucklands Beach, which reaches its end at Musick Point. The inlet extends past the suburbs of Glendowie, Wai o Taiki Bay, Point England, Glen Innes, Tāmaki, Panmure, and Ōtāhuhu to the west, and Bucklands Beach, Half Moon Bay, Farm Cove, Sunnyhills and Pakūranga to the east.

It has several smaller "tributary arms" which extend from it: the Pakūranga Creek and Ōtara Creek in the east, and the Ōtāhuhu Creek and Panmure Basin in the west. The Ōtāhuhu Creek forms the eastern shore of the narrowest point on the Auckland isthmus: here it is about 1.25 kilometres (0.75 mi) to the waters of the Manukau Harbour, an arm of the Tasman Sea.

It was originally called Te Wai o Taiki, meaning "The Waters of Taiki". The name Taiki is a shortened form of Taikehu, the name of an ancestor of Ngāi Tai.

Portage Road is the location of one of the historical portage overland routes between the two coasts. Here, the Maori would beach their waka (canoes) and drag them overland to the other coast, thus avoiding having to paddle around North Cape. A second portage was named Kāretu and went between the extreme north-east corner of the Manukau Harbour to a bay close to the site of the newest bridge across the Tāmaki, about 1 kilometre (0.6 mi) south of the Panmure Basin. The portages made the area of immense strategic importance in both pre-European times and during the early years of European occupation.

In 1865, the estuary was first crossed by a steel swing bridge, located at Panmure, to improve connection between Auckland and Howick. The location is 20 metres (66 ft) to the left of the left hand (Panmure) bridge shown in the photo. The circular base swivel was only removed in the 1980s from the southern shore. Stones and steel had been imported from Australia, possibly reflecting the still very basic nature of industrial construction in the young colony.

In the 1890s the mouth of the river was used as a safe anchorage for ships carrying explosives. One such ship, anchored in the mouth of the estuary, caught fire and exploded with loss of life. After this the explosives buoy was moved into a more open area east of Browns Island (Motukōrea), where it is still located.

In 1925 a 1.9-metre (6 ft 2 in) leopard that had escaped from the Auckland Zoo three weeks earlier was found dead in the Tāmaki river by a fishing party in Karaka Bay.

Due to its extent north–south and its position between Auckland City and its eastern neighbour Manukau City, the river is a natural barrier to traffic, especially as only three bridges cross it, all heavily trafficked and increasingly incapable of taking the peak hour flows. The Eastern Busway is a project that is designed to resolve this bottle-neck as one of its goals.

The Tāmaki River also has a marina / ferry wharf at Half Moon Bay, from where commuter ferries depart for the Auckland CBD and car/passenger ferries for Waiheke Island. Many yachts are also moored in its relatively well protected interiors. The river channel is marked with large green buoys. Deep draught vessels should stay close to the buoys as the channel, although averaging 20 metres (66 ft) deep is very narrow in many places. Near the large Point England sand spit there are numerous mudflats which are barely covered at high tide. The speed limit in the river is 10 km/h (5.4 kn). Rocks at the western mouth of the river at St Heliers are marked by a distinctive barber's pole. Vessels of more than 4-metre (13 ft) draught should not attempt the opening between Musick Point and Browns Island. The channel in this area is marked by port and starboard markers about 20 metres (66 ft) apart. It is 0.5 kilometres (0.3 mi) northwest of Musick Point. Large mussel beds extend out 200 metres (660 ft) from Browns Island into the river.

All content from Kiddle encyclopedia articles (including the article images and facts) can be freely used under Attribution-ShareAlike license, unless stated otherwise. Cite this article:
Tamaki River Facts for Kids. Kiddle Encyclopedia.