Sunnyhills is a suburb of Auckland, New Zealand. According to 2013 census, Sunnyhills has a population of 3,348. Sunnyhills makes up less than one percent of Auckland's population. It is part of the Pakuranga Electorate. 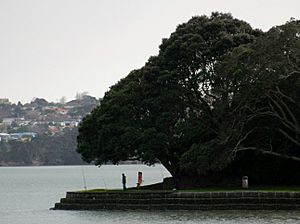 The walkway in Sunnyhills Pakuranga. Sanctuary Point where many fisherman like to go.

All content from Kiddle encyclopedia articles (including the article images and facts) can be freely used under Attribution-ShareAlike license, unless stated otherwise. Cite this article:
Sunnyhills Facts for Kids. Kiddle Encyclopedia.